Based on various news reports I have read over the last two days, it appears that Indiana governor Mike Pence will be Donald Trump’s pick for his Vice Presidential running mate on the Republican Party ticket.

When I visit TrunpPence.com, I see pay per click (PPC) advertising links. Based on the Network Solutions branding on the top of the landing page, this looks like a domain registrar-generated landing page rather than one chosen or controlled by the domain owner. I think this means the domain owner  doesn’t control the links, nor does the owner benefit from any revenue generated (to my knowledge).

Here is a screenshot of the TrumpPence.com landing page I took this morning (click for a large version): 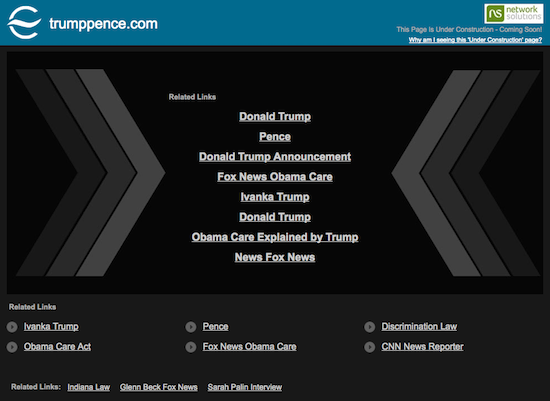 Interestingly, many of the links seem to be related to the Trump campaign, Trump family, or Presidential election news. In my (non-legal expert) opinion, these advertising links  could put the domain name at risk for the domain owner.

Depending on the ease of contacting the domain owner and the owner’s willingness to sell the domain name (assuming it is not already owned/controlled by the campaign), it would not surprise me to see a UDRP filed for this domain name. The UDRP process is quicker than litigation, and obviously time would be of the essence to get this domain name. Mr. Trump and his company  are  familiar with  UDRP filings.

With a situation like this, I would not wager a guess about the odds of succeeding in a UDRP should Donald Trump select Mike Pence as his running mate and the Trump campaign desire this domain name. The campaign may not even have any interest in this domain name, preferring to keep the Trump name and brand as the only name for its campaign website.

Regardless of the Trump campaign’s need or desire to own this domain name, from my outside perspective, I wonder if the current landing page could be risky for the domain name owner.

Elliot Silver - December 9, 2022 7
With the year drawing to a close, Escrow.com released its 2022 Master of Domains list. This list is comprised of the top 10 highest-grossing...

Elliot Silver - December 7, 2022 2
It's been a long while since I actively used Uniregistry to sell my domain names. Despite this, I continue to receive spam emails sent...