Tucows posted a job opening on LinkedIn for a Product Manager in its Domains group. Tucows operates a domain name registrar, as well as Hover, Enom, and associated registrars. The job opportunity is based out of the company’s Toronto, Canada headquarters.

Here’s what the job entails:

END_OF_DOCUMENT_TOKEN_TO_BE_REPLACED

You Can Now Remove GDPR Blocking at Enom and Tucows

One of the more frustrating developments over the past couple of years is GDPR. Registrars like GoDaddy, Uniregistry, and Network Solutions allowed US-based customers to opt out of the GDPR blocking for Whois records, but Enom and Tucows did not. For instance, this is how the Whois record for Philharmonic.com, a domain name I have registered at Enom, has looked since the implementation of GDPR: 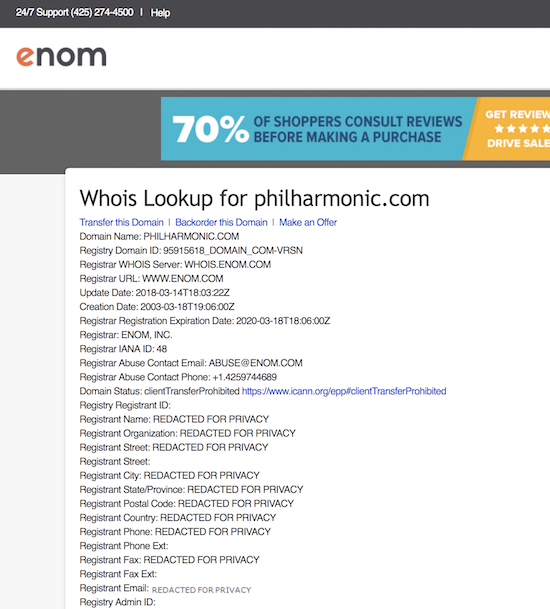 END_OF_DOCUMENT_TOKEN_TO_BE_REPLACED

Some domain investors received an email from Enom’s legal department yesterday notifying them about a subpoena that was received by the company. Enom sends these emails when the recipient’s information was found during an internal (Enom) search for documents related to the subpoena. If an investor received this email, it could be related to a Scratch Foundation lawsuit that was written about by Andrew Allemann earlier this year.

END_OF_DOCUMENT_TOKEN_TO_BE_REPLACED

According to a press release that just hit the wires, Web.com acquired Tucows’ ownership stake in NameJet. With this acquisition, I believe that the auction platform is now solely owned by Web.com.

My quick thought is that this will be good news for NameJet and its users. I presume that having two different publicly traded companies own NameJet could have been difficult to get things done. This should help streamline things for NameJet leadership, and hopefully it means Web.com will continue to invest in the platform. I am sure there are plenty of improvements that could be made, and having one owner should help in that regard.

It will be interesting to see what happens with the eNom expiry stream now that Tucows doesn’t have an ownership stake in the NameJet auction business. I believe Tucows has been sending its expired domain names to auction at GoDaddy Auctions. I think the majority of domain names I win on NameJet are registered at eNom, so that will be something to watch.

I am sure there is more to come….

The press release is below:

END_OF_DOCUMENT_TOKEN_TO_BE_REPLACED

Enom customers should expect to see a “temporary $1USD pre-authorization charge” on the credit card associated with their Enom account. The company cited a merchant provider switch, which requires the temporary pre-auth charge to authenticate credit card holder information.

I presume this announcement was sent to all Enom customers, but in case you missed it, here’s what was sent:

As an ongoing effort to improve payments at Enom, we will be changing to a new merchant provider over the next few weeks. Please be aware that during this transition, you may notice a pre-authorization charge of up to $1 USD on your credit card statement or online credit card portal. This pre-authorization charge is required by the merchant provider to authenticate card holder information, such as the billing address. This is not a permanent transaction, and the charged amount will be rolled back at the end of your billing cycle, if not sooner, depending on your credit card provider.

If you have any concerns, please contact support at customercare@enom.com.

It is not often that a company issues a public apology, but Enom apologized for poor customer service in a tweet yesterday afternoon:

We’ve failed to provide the support you deserve. Here’s our plan to attack the backlog and continually improve: https://t.co/Hq5ECm9SEF

Earlier this year, Tucows acquired Enom from Rightside, and it appears that the company has been making efforts to create a better user experience for Enom customers. In the meantime, the company acknowledged that it has not been able to offer up the customer support that should be expected. From a  blog post  that was published yesterday on Enom’s website:

“Tucows makes it a priority to set the bar for Customer Support in our industry. We hold ourselves to a high standard, and we know that lately, Enom has fallen short of it. We want to acknowledge the frustration this has caused our customers over the last few months. We’ve failed to meet your expectations, and for that, everyone here is deeply regretful. “

In addition to the apology given to customers, the blog post outlined some of the improvements that are planned for Enom and its customer support team. In addition, the post highlighted