GoDaddy is a privately owned, Internet-based company that provides a variety of services including domain name registration, web hosting and e-business software sales. The company, which is headquartered in Scottsdale, Arizona, was founded by Bob Parsons. Parsons previously owned a financial services software company, which he sold in the mid-1990s upon retirement. He came out of retirement in 1997 to form Jomax Technologies, the predecessor to GoDaddy.

Since it’s inception, GoDaddy has risen to become the largest domain registrar in the world, with tens of million of domains registered to its clients. The company ranks as the world’s largest ICANN-accredited registrar; it’s approximately four times larger than its nearest competition. Recent corporate acquisitions include Outright, Locu, Afternic, and Media Temple.

GoDaddy has redefined Internet hosting services, and it has been the recipient of numerous industry awards and accolades. Among these awards are the 2001 Arizona BBB award for Business Ethics and the 2011 SC Magazine award for Best Security Team. In 2011, it ranked number four in the Phoenix Business Magazine list of “Best Places to Work in the Valley” and it made the 2012 Forbes list of “Best 100 Companies to Work For.”

Known for its sometimes controversial commercials and interesting spokespersons, GoDaddy also sponsors a number of charitable causes in support of domestic violence and child abuse awareness, and sports events, including NASCAR and the Super Bowl. In 2013, the company shifted its advertising strategy to focus more on small to medium sized business owners (SMB). Reflecting this change, its commercials and advertising materials shifted from “sexy” to smart.

As part of his coverage of GoDaddy’s pending acquisition of Dan.com, Andrew Allemann published an interview with Paul Nicks, President of Domains, at GoDaddy. The question and answer that caught my attention the most was regarding commission:

Domain Name Wire: Many people use GoDaddy’s Afternic DLS to get in the registrar registration path, but choose Dan.com landers because they’re cheaper (9% vs. up to 20%). Will this still be an option or should we expect to pay higher prices for landing page sales in the future?

Nicks: We are still in the early stages and do not have a plan around commission alignment. Once we have updates to share, we’ll share proactively.

The thing that jumped out at me was Paul’s comment about “commission alignment.”

END_OF_DOCUMENT_TOKEN_TO_BE_REPLACED

I list nearly all of my domain names for sale on both Dan.com and GoDaddy (via Afternic). The domain names mostly resolve to Dan.com landing pages but are also listed via GoDaddy’s expansive sales network. These are the only two platforms I currently use to sell domain names, beyond my own landing pages.

In a blog post published on Medium this morning, Dan.com announced it is going to be acquired by GoDaddy:

📣We are thrilled to announce we entered into an agreement with GoDaddy to bring Dan’s innovative products and engine to one of the most respected brands in domains and their 21+ million customers!

END_OF_DOCUMENT_TOKEN_TO_BE_REPLACED

With 2 factor authentication enabled on my accounts in addition to the DTVS added level of security, I did not really have much reason or motivation to merge these two accounts. The domain names all renewed with the credit card on file for each account, and I only actively used one of the accounts for buying domain names. The only issue I had was when I wanted to check on something related to a domain name in one account and logged in to the wrong account.

END_OF_DOCUMENT_TOKEN_TO_BE_REPLACED

“know. your. worth.” That is wise advice from a domain name registrant who was able to turn a $500 offer via GoDaddy’s Domain Broker Service into a $435,000 domain name sale. The story of how the seller was able to do this, including emails from GoDaddy, was shared in an excellent Twitter thread domain investors will want to read:

how i bought a crypto domain for $16,
told a multi-billion dollar CEX to kick rocks,

and negotiated my way from a $500 offer to selling it for half a million dollars:

END_OF_DOCUMENT_TOKEN_TO_BE_REPLACED

Last night, GoDaddy announced its signed a contract with the government of Tuvalu to manage the .TV ccTLD extension. The .TV registry had previously been operated by Verisign until the contract expired in 2021:

END_OF_DOCUMENT_TOKEN_TO_BE_REPLACED

You can have a look at this screenshot from TowelSpa.com, which utilizes the GoDaddy BIN landing page, to see how the implementation appears: 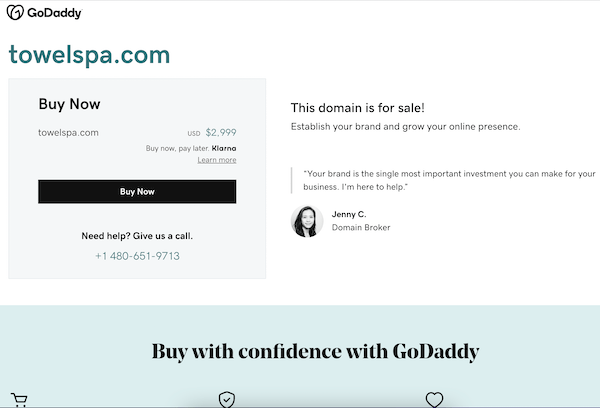