Would Love Another Chance

I’ve been investing in domain names as a full time career since late 2007. I have bought my fair share of solid domain names, and I have also missed out on some good deals. Some seemed overpriced at the time, but looking back on things now, I wish I had pulled the trigger.

One strategy I try to employ is that I would rather pay a bit more than I think a domain name is worth wholesale rather than risk losing it to a colleague or competitor. If a domain name has such strong resale potential, the few hundred or few thousand dollars more it takes to buy it should not be an obstacle. In practice, it is very hard to do this without spending far too much money because it can be tough to determine where to draw the line.

Andy Booth started a Twitter thread asking people to list the one name that got away. Mine would probably be Values.com, which I previously wrote about Here’s Andy’s thread:

END_OF_DOCUMENT_TOKEN_TO_BE_REPLACED 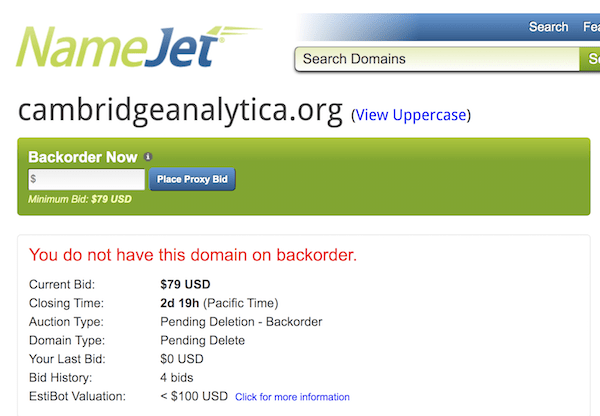 END_OF_DOCUMENT_TOKEN_TO_BE_REPLACED

Be Mindful of Minimum Bid at NameJet

There have been a number of changes at NameJet due to the integration with SnapNames. Most noticeable for me is the backorder deadline time change. I can now place my back orders one hour later than I could before the integration. One issue that has tripped me up more than once is the minimum bid difference on some domain names. Instead of the standard $69 bid, I need to place a $79 bid in order to backorder the domain name.

The $10 difference is not generally a problem, especially considering it is now rare for me to win an auction for the minimum bid. The issue is that when I click the “Place My Bids Now” button, only the $69 backorders are placed unless I manually change the minimum bids for the auctions that require a $79 bid.

Here’s what happens when I do not update the bid to meet the minimum before placing my backorder:

END_OF_DOCUMENT_TOKEN_TO_BE_REPLACED

How I Use Dropping.pro for Domain Sales Lead Gen

Elliot Silver - September 23, 2020 2
In response to yesterday's article about using contact forms to sell domain names, two readers asked me for more information about my usage of...

Original Domain Investor is “‘psychedelic concierge’ to the stars”

Elliot Silver - September 22, 2020 11
I was reading the New York Post this afternoon, when I came across a photo of a person I recognize, Mike Zapolin, known to...

Elliot Silver - September 22, 2020 8
I haven't been doing a whole lot of outbound marketing to sell domain names this year, primarily due to the pandemic and economic fallout...

Elliot Silver - September 21, 2020 5
A UDRP was filed against Spase.com at the World Intellectual Property Organization (WIPO). The domain name is registered to Mrs Jello, LLC, the company...