Bloomberg Video: “How Much Would You Pay for the Sandwich.com URL?”

Sedo and Yahoo received a ton of coverage for their auction of some of Yahoo’s domain names, and I thought you might like to see this video that was shown on Bloomberg TV. The commentators discuss the auction and primarily focus on the sale of Sandwich.com.

You can bid or follow along with the auction here.

Yahoo to Auction Portfolio of Domain Names via Sedo

According to a press release from Sedo, “more than 100 premium domain names from Yahoo portfolio to be auctioned.” The Yahoo domain name auction will take place on Sedo’s platform from November 14 – 21, 2013. Some of the high value domain names include AV.com, Sandwich.com, Sled.com, Jockeys.com, and Crackers.com.

It’s not every day that a publicly traded Internet company decides to publicly sell some of its valuable domain name assets at auction. I think this domain auction could produce some solid results considering the inventory, especially given the provenance and history of the assets. For instance, AV likely stood for Alta Vista, which Yahoo acquired in 2003 and shut down this past July. In my opinion, reserve prices are on the high side, but what doesn’t sell now opens the door for future discussions.

Some of these domain names forward to pages within Yahoo’s network and others are parked at Sedo with a purchase link at the top of the landing page. At the time of this post, only 29 domain names are listed for sale in the auction, but Sedo announced that there are more than 100 domain names included in the auction. You can view

END_OF_DOCUMENT_TOKEN_TO_BE_REPLACED

In June, I wrote an article about how domain registrars can deal with Yahoo’s decision to recycle email addresses. This decision could prove to be problematic for domain owners whose email addresses that are connected to their domain names are redistributed to other people.

This afternoon, I received an email from Yahoo informing me that I was given an email address I request. The email from Yahoo said, “Your wish list pick [redacted] is all yours and ready to claim. You have until 9/7/13 11:59:59 PM Pacific Daylight Time to claim it.” I chose an email address that will work well for me, and I am unwilling to share it in order to cut down on spam emails.

END_OF_DOCUMENT_TOKEN_TO_BE_REPLACED

How Domain Registrars Can Deal With Yahoo Email Recycling

Andrew Allemann discussed the potential problem domain registrars face if / when Yahoo begins to recycle email addresses that haven’t been used in over a year.

The problem is not just limited to domain registrars, who will be forced to deal with the aftermath of angry customers that had domain names stolen.

The real problem will be had by

END_OF_DOCUMENT_TOKEN_TO_BE_REPLACED

In light of yesterday’s article regarding the monetization change at Yahoo impacting .CO, .TV, .US, .INFO, and .BIZ domain names (referred to as a “revenue cap”), I want to share an update on that I received from TrafficZ this evening.

Craig Rowe of WhyPark posted something similar in the comment section of yesterday’s article relating to how WhyPark and Parked are dealing with this situation.

The full update is posted below:

“We’ve received a lot of feedback and questions on the notice that we sent out yesterday. As such, we’d like to offer some additional clarification with respect to the recent Yahoo! revenue cap implementation. Specifically, Yahoo! is just one of many advertising partners that TrafficZ works with to monetize your domains and traffic. And although Yahoo! may have imposed a cap on certain TLDs, TrafficZ will continue to monetize all high quality domains and traffic through our multiple advertising partners, regardless of TLD, revenue and/or volume.

Furthermore, TrafficZ clients with exceptional .INFO, .US, .TV, .BIZ and/or .CO domains should submit them to our account team for further review. Where appropriate, TrafficZ will work with Yahoo! to have revenue cap limits raised or removed from qualified domains, regardless of TLD.

As always, we strive to keep you informed and provide you with the best domain monetization service possible. Please feel free to contact us if you have additional questions or concerns, support@TrafficZ.com.”

There are plenty of times when I “fat finger” a url and end up on a website I had no intention to visit. We all do it. Oftentimes, these typo domain names are owned by typosquatters who place pay per click links on the landing page, with the hopes of making money from this traffic.

This morning, I went to visit a popular blog hosted on Google’s Blogger platform. These websites generally are formatted with a url similar to this: blogname.BlogSpot.com. When I visited the blog this morning, the page didn’t load, so I double checked that I had the correct domain name. I didn’t. Instead I had blogname.BlogSport.com.

I did a quick Whois search to see who owns the domain name, and I was very surprised to see that Yahoo owns BlogSport.com while Google owns its flagship BlogSpot.com.

Today, BlogSport.com sits idle, as Yahoo isn’t monetizing or forwarding the domain name, presumably because they know that Google might take action if they did.   According to Alexa, over 10 million people visit Google’s BlogSpot a month. There must be thousands of people who accidentally visit Blogsport.com a month, intending to visit a blog or website on the Blogger service. 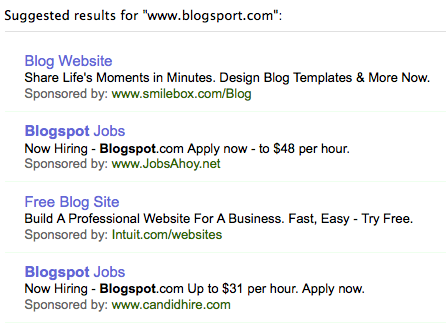 So whose making money on this valuable typo domain name? Presumably the Internet service providers like Verizon and Comcast who monetize error landing pages “helping” web browsers who accidentally type-in an invalid domain name. It’s very kind of them to do this for us.