A couple of weeks ago, I wrote about a GoDaddy Auctions glitch that occurred when a network connection was lost as the time on an auction ran down. I was able to replicate the error by turning off my Internet connection shortly after placing a bid on an auction. Here’s what I wrote about the glitch:

“If a winning bidder’s connection with the GoDaddy Auctions server is lost as the auction is ending, the timer will continue to count down until the end of the auction. Assuming there was no refresh or reconnection to the GoDaddy server before the auction concluded, the auction will appear to show the leading bidder as the winner.”

I received an update from Paul Nicks to let me know that the company added a message to auction pages in the event a bidder loses the connection to GoDaddy’s servers as an auction is ending. If there is a connectivity issue, instead of declaring the bidder the winner upon the conclusion of the auction countdown, a message appears to indicate a lost connection.

As I did last time, I placed the high bid on an auction I was happy to win but willing to lose to test this out. I turned off my Internet connection and left my office for about 20 minutes. When I returned to my desktop, I saw a message that stated “Connection to the server lost.” Here’s a screenshot: 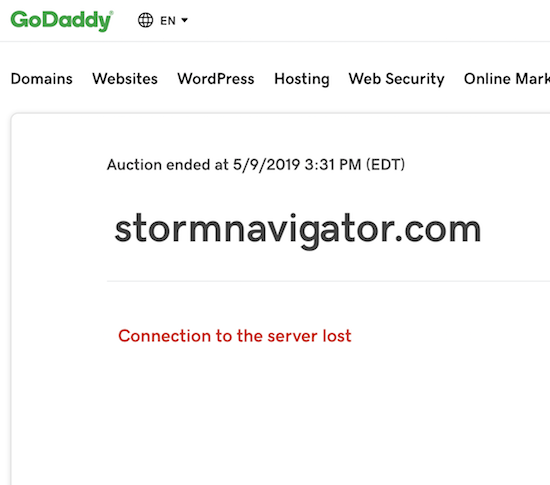 While I was out of the office, I did receive an outbid email notice, so I knew that I lost in the meantime.

Paul let me know that GoDaddy adds a different message for a very short period that says something like “verifying status” until they get the actual status. In my case, because the Internet connection was down, it did not tell me if I won or lost until I reconnected to the server.

Hopefully that means the auctions glitch has been resolved.