Andrew Allemann wrote about a GoDaddy Auctions “glitch” that caused a bidder to lose an auction that he thought he had won. I can see how he would be upset because the messaging does indicate that he won the auction despite the fact that he lost the auction.

I received the same email from the person who emailed Andrew, and I spoke with Joe Styler about it yesterday. Paul Nicks provided a comment to Andrew about what caused this situation.

From what I understand, the issue is one of connectivity. If a winning bidder’s connection with the GoDaddy Auctions server is lost as the auction is ending, the timer will continue to count down until the end of the auction. Assuming there was no refresh or reconnection to the GoDaddy server before the auction concluded, the auction will appear to show the leading bidder as the winner.

I wanted to test this out to see if I could replicate it. I was the leading bidder on the SocialAmplify.com auction, which ended this afternoon. With approximately 5 minutes remaining in the auction, I was the high bidder. At that point in time, I turned off my Internet connection to see what would happen as the auction came to its conclusion. As was the case in the auction referenced in Andrew’s article, I was also shown as the winning bidder in the SocialAmplify.com auction:

When I restarted my Internet connection and refreshed, the auction showed that I was outbid and actually lost the auction: 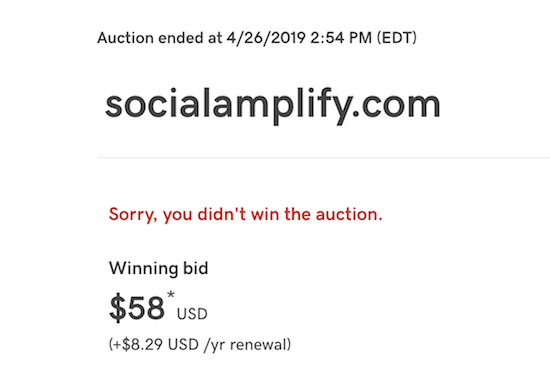 The one big giveaway, though, is that I received an email from GoDaddy telling me I was outbid on the auction. The email came through on my iPhone as my office Internet connection was down: 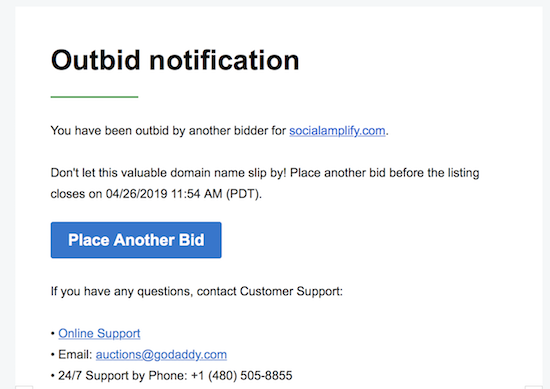 In the case of the SocialAmplify.com auction, the connectivity issue was mine. I disconnected my Internet to see what would happen with the auction if I did not have a connection. In other cases where this happened, it would not be possible for me to know where the connectivity issue came from. I don’t even know if that is something GoDaddy can determine.

I can see why someone would be upset if they thought they won an auction but did not realize their connection was lost. GoDaddy does send outbid alert emails to let bidders know they were outbid. If someone’s Internet connection went down, and their desktop and mobile connections were lost, the email might not be received until it is too late. That being said, if they lost their Internet connection for more than the extended auction time, I don’t think they would be able to place a higher bid anyway.

I don’t know if it is technically possible or feasible, but I think it would be helpful if GoDaddy displayed a notice informing the bidder that the Internet connection was lost to ensure they know to refresh and/or reconnect during the closing moments of an auction. This is an issue that should be addressed though. Not only is GoDaddy likely losing revenue with this, but it is creating a bad user experience for anyone who is impacted.