LeonardoDicaprio.com is the most valuable expiry domain name on the daily auction lists I receive. Created in 1997, LeonardoDicaprio.com expired in early October of this year. The domain name is currently registered at Network Solutions, and it will be sent to auction at NameJet if it is not renewed immediately. As I am sure you know, Leonardo Dicaprio is a highly regarded American actor.

Using the Whois History tool at DomainTools, I can see the domain name was previously registered to Birken Interactive Studio, Inc. According to an article on ZDNet from 1999, this company is “the production company established by Leonardo DiCaprio.” The registrant email address for this domain name is through the LDCFoundation.org domain name. This domain name is used by the Leonardo Dicaprio Foundation, a non-profit organization connected to Mr. Dicaprio.

Using the Internet Archive, I can see that LeonardoDicaprio.com has been used by the actor for many years. Mr. Dicaprio does not link to LeonardoDicaprio.com in his Twitter profile, but the Google knowledge box prominently lists that domain name on a search for Leonardo Dicaprio: 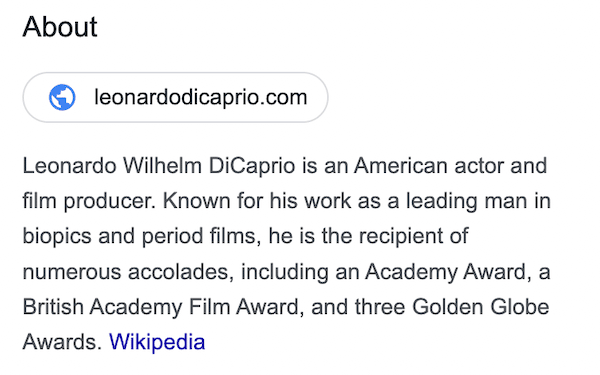 At the time of publication, there are 75 bids for LeonardoDicaprio.com at the NameJet. I presume the domain name could be legally used by someone who wants to create a fan website to honor Leonardo Dicaprio. I think it could be highly risky to spend money to buy the domain name.

I believe Mr. Dicaprio or his team should be able to renew LeonardoDicaprio.com at Network Solutions today in order to prevent the domain name from being auctioned.

Update: The domain name was renewed for ten years.

My Favorite Kind of Sale