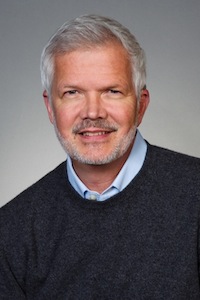 For the past four years, Ken Hansen has been Senior Director of Business Development, GM, ,nyc at Neustar. In that role, he has been working to promote the .NYC registry, which has the backing of New York City.  I just learned that Ken is leaving Neustar to become CEO of the co.com Registry, a recently formed venture that will offer .co.com domain names.

Paul Goldstone was the original owner of the co.com domain name and opted to sell domain names because of the popularity of the .co.cctld country extensions (I am told 61 countries use .co. in their ccTLD).  co.com believes “demand for domains ending in .com will not be going away“, and aims to meet the demand with short recognizable co.com domain names. The company’s tagline, is “Get the .com you’ve always wanted”.

The company plans to begin selling domain names in the first quarter of 2014. co.com will have a traditional Sunrise Period for trademark holders, and that will be followed by a Landrush Period and General Availability. The company also plans to privately sell some of its premium domain name assets. Those interested can sign up for launch updates at co.com.

The Registry scored a major coup in hiring Ken Hansen as its CEO. Ken has a ton of knowledge in this space, both on the marketing and policy side. As Gregg McNair said in the press release, “today our CEO is among the most respected and savvy operators in the registry space. Ken’s appointment along with his knowledge and understanding of the co.com opportunity is turning heads in a sea of confusion.”

The press release with the news is below:

“When Paul asked me to work with him to build a ‘dream team’ for co.com, I immediately thought of Ken Hansen as our leader. Today our CEO is among the most respected and savvy operators in the registry space. Ken’s appointment along with his knowledge and understanding of the co.com opportunity is turning heads in a sea of confusion. To him the co.com solution was so simple and obvious” McNair said.

Sixty-one countries currently offer domain names ending in “co.countrycode” such as co.uk and co.jp, with registrations for those extensions totaling over 11 million.   Additionally, each year over ten million new .com domains are registered.   co.com Registry intends to capitalize on this strong demand, and the current lack of available domains, by opening up a new tract of land in .com.

“The demand for .com names is not going away”, says Hansen.     “We intend to meet that demand by offering short memorable domain names ending in .com”.

The co.com registry will have an open registration policy, meaning that any company, organization or individual will be eligible to register domain names like companyname.co.com, organization.co.com, or anything.co.com.     “I couldn’t be more excited with the team and the future of co.com domains, where users will be able to pick the perfect .com domain to fit their online and branding needs,” said Goldstone.

co.com domain names are expected to become available in the first quarter of 2014. Plans call for a “Sunrise Period” for trademark holders, followed by a first-come-first-serve “Landrush Period”.   Premium domain names like travel.co.com, tickets.co.com, wine.co.com, insurance.co.com and spa.co.com, are also available.

Those who wish to receive launch updates and additional details, as they become available, can subscribe to the email list at www.registry.co.com.   The co.com team is attending ICANN Buenos Aires and is also available to meet with registrars interested in becoming distributors of co.com domains.

“Domaining.com has been apparently compromised”