In June, I posted a poll question asking people if they thought Jump Bikes, which was acquired by Uber last April, would be able to acquire the exact match Jump.com domain name. At the time, Jump.com was owned by Microsoft, meaning the domain name would either be impossible to buy or very expensive. In that poll, 51+% of those who voted said “No,” the company wouldn’t buy Jump.com.

Yesterday morning, I saw that Alan Dunn tweeted about the Jump.com domain name because it was acquired by the bike startup:

Looks like JumpBikes acquired Jump(.com) from Microsoft one month after Elliot’s poll in June. I’m no wizard but someone might owe him a bike if they saw the article ha. One of my favorite all time domains… now gone forever. #domains @DInvesting #anotheronegone

If you visit Jump.com right now, you will be redirected to JumpBikes.com. The Whois record shows the domain name is now registered to Social Bicycles, Inc., which is the company doing business as Jump Bikes.

Interestingly, Jump.com was registered at MarkMonitor before and after the domain name changed hands. Because MarkMonitor offers brand protection and advisory services pertaining to domain names, I would be curious to know if the company helped facilitate a deal between its clients. Mark Monitor does not comment on deals, so its involvement (if any) will not be shared.

Jump.com is a valuable domain name. Alan later speculated the price could have been as high as $5 million. Unless Microsoft or Uber deems the sale price to be substantial enough to report it in a SEC filing, we likely won’t know the purchase price. If Uber decides to go public, they could conceivably report it in a S-1 filing, although it is very possible the company would lump all domain name acquisitions together in one line item, making it impossible to decipher.

With the acquisition of the (presumably expensive) Jump.com domain name, it shows the company is serious about this bike sharing company. Jump.com is an awesome domain name and it was a wise acquisition.

I reached out to multiple parties to see if I could get any insight about the acquisition, but so far, I did not get any details. If I am able to learn anything about it, I will be sure to post an update. 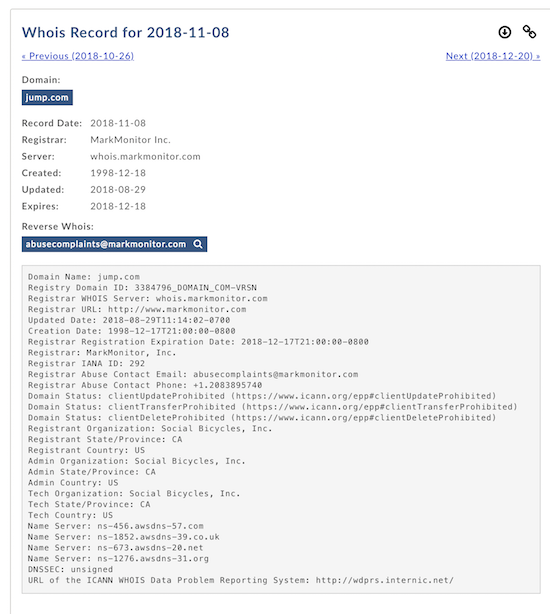 Update – As of December 21, the Whois record is showing Microsoft as the registrant. I am not sure what to make of this. Jamie Zoch noted this on Twitter:

In regards to my earlier tweet about Jump(.)com if Uber isn't leasing the domain from Microsoft, this would be a huge potential goof on behalf of MarkMonitor transferring a domain not owned by MS. Prior whois shows Social Bicycles Inc. as the owners. https://t.co/NcHWh39hs0 pic.twitter.com/ecjfrFUtqT