I haven’t heard much buzz about the Cyber Intelligence Sharing and Protection Act (CISPA), and I suspect you probably haven’t either. In fact, if it wasn’t for a blog post by Namecheap, I probably wouldn’t know that it’s re-emerged.

Here’s how Namecheap has summarized the issue with CISPA should it be passed into law:

“CISPA, which emerged in 2012, has been rebirthed this week as an  even bigger threat  to online freedom. If CISPA is passed, the US government gains the power to shut off Internet traffic and empowers the US government to ask your ISP about your online activities in the efforts to learn about possible cyber security threats and Internet attacks. Advocated under the premise of anti-terrorism legislation, this legislation is so broad that it threatens to endanger the privacy of every individual and ordinary and law abiding citizens. This act makes your private online activity now public, giving ISPs the right to share your personal information completely without your knowledge, due process, or authorization.”

As its done in the past, Namecheap is trying to raise awareness about CISPA by making a financial pledge tp the  Electronic Frontier Foundation (EFF). For every tweet and re-tweet mentioning its blog post, Namecheap is pledging a $.10 donation to the EFF. If you register or transfer a .com, .net, or .org domain name to Namecheap, you can save $1.00 using promo code CISPAalert, and in addition, the company will donate $.10/name to the EFF.

Not only is this a great way to get people to know about CISPA, but it also shows Namecheap’s marketing prowess. Over the last couple of years, the company has donated over $100k to the EFF as a results of efforts such as this.

If you’d like to read more about CISPA and what others are saying, I encourage you to check out the following articles on the topic:

In January, Namecheap held its second (and now annual) “Move Your Domain” Day, and the company offered special prices and a donation pledge to the Electronic Frontier Foundation (EFF) in an effort to induce inbound domain transfers.

This evening, Namecheap (which is also sponsoring Water Night tonight on behalf of the Water School) shared an infographic with more information about its Move Your Domain Day. The graphic offers insight including the following information:

There was additional cool insight on the infographic. Check it out below or visit the Namecheap blog for more information.

Thank you all for making a generous donation of over $44,000 to the Electronic Frontier Foundation possible! ow.ly/h4sZ8 #myddnc

A week and a half ago, Namecheap announced it would make its “Move Your Domain Day” an annual protest. It was piggybacking on the success it had in 2011 in response to Go Daddy’s stance on SOPA.

This year’s Move Your Domains Day, held on January 22nd, raised funds for the Electronic Frontier Foundation (EFF). The company announced that there would be a sliding donation scale for every domain name transferred to Namecheap based on the following:

By the close of business, Namecheap announced that 29,541 domain names had been transferred in to the company, and they made a donation in the amount of $44,311.50 to the Electronic Frontier Foundation.

It was a solid marketing effort that raised funds for a worthy cause.

A little over a year ago, Go Daddy’s position on SOPA brought quite a bit of negative publicity (deservedly)  onto the company, although it later changed its position and opposed SOPA. Go Daddy competitor NameCheap  spearheaded a domain transfer initiative known as “Move Your Domain Day,” and many people joined in and transferred domain names from Go Daddy.

I received a press release from NameCheap announcing that the company is turning its “Move Your Domain Day” into “an annual protest and a commemoration of sorts that will continue to shine a light on the issue of a free and open internet, an issue we at Namecheap strongly believe in.”

It’s a smart marketing move for the company to make since people tend to have short memories about this type of thing. Giving a financial incentive to transfer domain names is good marketing, and it will likely draw considerable attention in the coming days.

Go Daddy is by far the largest domain registrar, and some of its recent missteps (elephant hunting and SOPA to name two off the top of my head) have opened the door for smaller registrars to take some business.

Press Release:
Namecheap, a leading domain name registrar, announces its second annual Move Your Domain Day for January 22nd. In 2012, Namecheap launched the Move Your Domain Day initiative to remind its users about the dangers of a closed Internet as brought upon by the possible passing of SOPA, the Stop Online Piracy Act. While the threat of the SOPA act has passed, similar acts have been proposed that may continue to threaten the very liberties we have earned the right to enjoy.

“We want “MoveYourDomainDay” to become an annual protest and a commemoration of sorts that will continue to shine a light on the issue of a free and open internet, an issue we at Namecheap strongly believe in,” Richard Kirkendall, CEO of Namecheap, said. “Last year showed us what could happen when the entire internet mobilizes for a cause and we want to continue that spirit that inspired so many to make a stand. We donated over $60,000 to the Electronic Frontier Foundation to continue fighting bills like SOPA. We invite and urge every registrar, hosting company, or online entity that shares these same beliefs to participate in their own way and every customer to vote with their choice in company they do business with. As long as it brings more attention and focus to this extremely important issue, everybody wins.”

“EFF is pleased to join Namecheap in celebrating digital rights within the greater the Internet community. The funds donated from the moveyourdomainday effort will ensure EFF can continue to fight for free expression for Internet users worldwide,” said Shari Steele, Executive Director of the Electronic Frontier Foundation.

Namecheap is a Los Angeles-based ICANN accredited domain registrar founded in 2000 by CEO Richard Kirkendall. With over 800,000 clients and millions of domain names under management, Namecheap is one of the top domain registrars in the world and also offers web hosting services. Find out more by visiting us at http://www.namecheap.com. 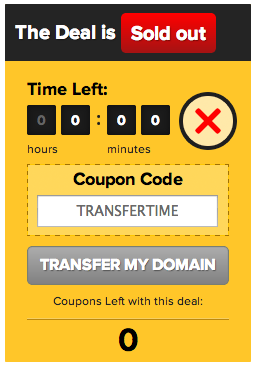 It looks like the old saying, “you snooze, you lose” is true when it comes to the NameCheap Black Friday special domain transfer offer. As I mentioned earlier today, NameCheap was offering .com, .net, and .org domain transfers for less than $1.00 (plus ICANN’s fee).

According to the graphic on the special offer page, the limited time offer has sold out already.  The company gave warnings about how much time was remaining and how many deals were available, and it looks like customers were quick to transfer their domain names.  This was somewhat reminiscent of the plethora of  SOPA protest transfers a little under a year ago and the elephant protests of a little over a year ago.

Dot com transfers for under $1.00 is a pretty good deal, and NameCheap was recently voted the most popular domain registrar by LifeHacker readers.

It appears that NameCheap is planning to run other domain related deals later on today as well as on Cyber Monday, so if you missed out on this morning’s special offer, you might want to set a reminder. The company has scheduled a $.98 domain registration offer for 6pm Eastern this evening, and that is limited to 2,000 total usages (not sure if it’s 10 domains per usage or what the terms are). I don’t know what other offers they are planning, so you’ll have to check their website out for more details.

As you can see, this isn’t an affiliate link and NameCheap isn’t an advertiser. I happen to think it’s a good deal and have heard good things about the company.

NameCheap Offering Domain Transfers for Under $1.00

There always seem to be great deals, coupons, and special offers when you are looking to register a new domain name, but when you are trying to renew one of your domain names, renewal deals are as common as unicorns.

One way to save money when it comes time to renew your domain name is to transfer it to a different domain registrar. Yes, it might lock the domain name up for 60 days and prevent you from transferring it again, but if you aren’t looking to sell it, that shouldn’t be a big deal.

It looks like NameCheap is leading the pack when it comes to Black Friday and Cyber Monday deals. The company is offering a promo rate of $.98 for a transfer of a .com, .net, or .org domain name. There is a limit of 10 domain names per customer and a few other restrictions, so check out the sale page for more details and to take advantage of this coupon code “TRANSFERTIME.”

If I find any more domain registration, renewal, or transfer deals (that are actually deals), I will let you know.