I just received an email from regarding the Sex.com domain name, which had been scheduled to be auctioned tomorrow morning in New York City. According to the email sent to me, legal action has been filed, and the domain auction will apparently not take place as previously scheduled as a result. The news was released by Mike Mann via Facebook and Twitter (see screenshot below).

Here’s the news release that was sent to me:

Petitioners took this action to protect their interests and to maximize value for all other creditors and equity holders. The filing will stay the public auction foreclosure proceedings previously scheduled for March 18, 2010, which petitioners believe would have diminished the value of Escom’s assets. 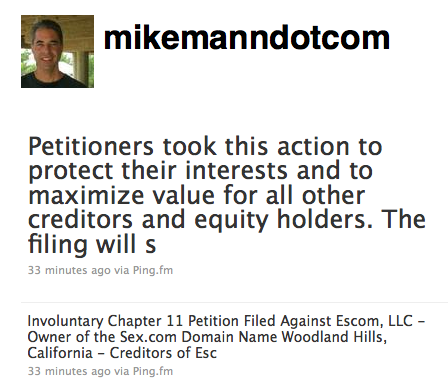