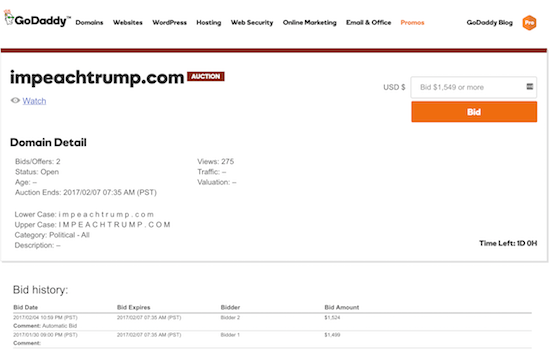 The ImpeachTrump.com domain name is currently in auction at GoDaddy Auctions. There have been two bids placed in the auction, and the current high bid is already at $1,524. The starting bid was $1,499. There is approximately one day remaining in the auction. There does not appear to be a reserve price that I can see, so it looks like the high bidder will win the auction.

With one day to go in the ImpeachTrump.com auction, I would not be surprised to see this domain name sell for quite a bit more money. I am sure there are plenty of groups who would like to own and use this domain name, and there is still a lot of money in politics.

Elliot Silver - June 28, 2022 13
I list nearly all of my domain names for sale on both Dan.com and GoDaddy (via Afternic). The domain names mostly resolve to Dan.com...