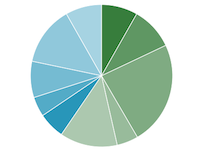 Whether you submitted a name, made a comment, or logged a vote, thank you again for participating in the contest. I was surprised at the number of submissions, happy that three sales have been reported so far, and hopeful that the additional exposure from a Domaining.com sponsored headline will help the winning name sell.

There were nearly 300 votes cast for the top ten domain names, and one name was the winner by a pretty solid margin. The winning domain name received about 24% of the total votes cast.

I thought it was pretty cool that the votes were pretty evenly spread out for the remaining names, which indicates that none of the names selected were “bad.” I posted a screenshot of the vote distribution so you can see how evenly spread the voting was. I could come up with a reason why each domain name has value, but I think the winning name is pretty solid and will likely sell.

Anyway, without further adieu, the winning name was BabyPhotographer.com, with a price of $5,900. I think there were likely a few reasons contributing to its win.

There are thousands of baby photographers across the United States, and it’s a profession with many independent contractors. There can only be one company that uses the exact match “BabyPhotographer.com” domain name, and it’s a status symbol, good for SEO, and a level of authority with a name like that. A baby photographer can make several hundreds of dollars for each photo shoot, so these professionals wouldn’t have an issue paying the asking price.

Incidentally, I sold BirthPhotography.com to a photographer a couple years ago, although the price is confidential.

In addition to these intrinsic factors, I also thing the fact that HyperbaricChambers.com and WritingBlog.com were sold during the course of the voting caused those two names to receive fewer votes than they may have had they not sold.

Thank you all for participating. I will be in touch with the winner to determine a listing date. If you are interested in buying it, of course you can get in touch with him prior to the sale listing.

Elliot Silver - December 9, 2022 4
With the year drawing to a close, Escrow.com released its 2022 Master of Domains list. This list is comprised of the top 10 highest-grossing...

Elliot Silver - December 7, 2022 2
It's been a long while since I actively used Uniregistry to sell my domain names. Despite this, I continue to receive spam emails sent...