When I arrived at the NamesCon exhibit area on Monday morning, one of the first things I noticed is that Coffee.Club and the .Club Registry are heavily promoting the Coffee.Club business. The popular coffee stand located between the registration booth and the exhibit hall now has Coffee.Club branding, and the pair of companies have been handing out passes for free cups of coffee to conference attendees (regular cost is around $4 for a large cup).

In addition to the rebranding of the coffee stand, the coffee that has been served inside the exhibition hall has Coffee.Club branding as well. Just about everyone drinking coffee at NamesCon is using a Coffee.Club cup. Because of an existing contract with a coffee provider, the coffee that is being brewed is not from Coffee.Club though.

I think this is smart marketing for two reasons. First, there are a lot of coffee drinkers in the crowd, and there is no doubt that everyone now knows about Coffee.Club. Second, and more importantly for the .Club Registry, people at the conference can see that the registry is supporting the most prominent startup to use a .Club domain name. They can get a glimpse of the marketing support behind this Startup.Club venture, and perhaps that will open a conversation with a prospective buyer.

Coffee.Club founder Bill McClure hinted that they would have a presence at the conference, but it’s more extensive than I expected. It appears that this new venture has gotten off to a good start. Coffee.Club currently ranks #1 in Google for a search of coffee club, and the website ranks #3 in Bing.

Separately but interestingly, yesterday, it was announced that a deal was reached with Howard Lefkowitz for the Vegas.Club domain name. It will be interesting to see how/if that is promoted at next year’s NamesCon. 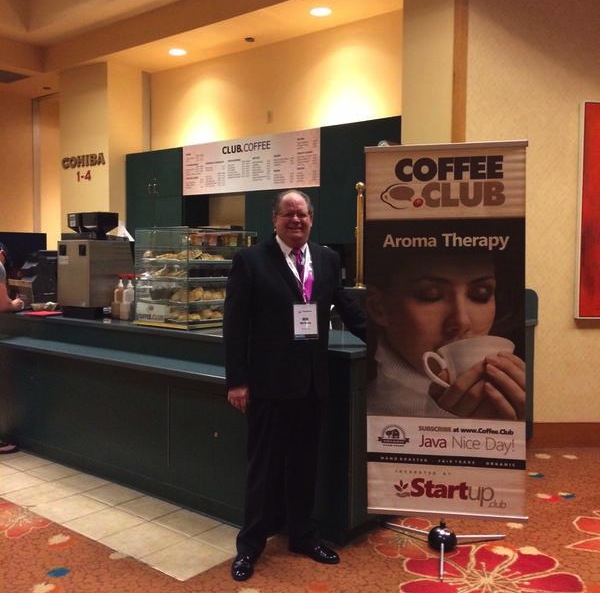