A little over two weeks ago, I wrote about the sale of the ClintonKaine.com domain name for $15,000 via Flippa. At the time of the article, I mentioned that before the domain name’s registration information went private, it had been registered to an entity called Parscale Media. An article in the San Antonio Business Journal appears  to connect  this registrant  with Donald Trump’s Presidential campaign.

According to an astitute observation by a reader of my blog, it looks like ClintonKaine.com is now being used. If you visit ClintonKaine.com today, you are forwarded to a page within Donald Trump’s website, DonaldJTrump.com with a heading that says “Disqualify Hillary Clinton.” In the screenshot of the landing page below, you can see that the domain name is mentioned as a referrer in the long url: 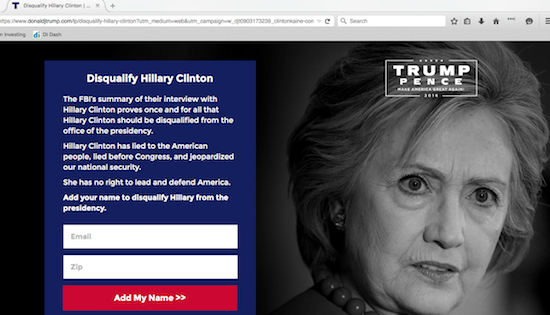 Because the domain registration is private right now, it is not entirely clear who owns this domain name. However, it does look like the domain name is being used to help Hillary Clinton’s competitor, Donald Trump.

The Clinton / Kaine Presidential campaign could have bought this domain name when it was for sale. Now that it is being used against her campaign, it looks like it was a missed opportunity. I wonder if Mr.  Trump is going to mention this at some point before the election  to call attention to the fact that Mrs. Clinton did not get this domain name.

Thanks to Bruce Breger for sharing this update with me.