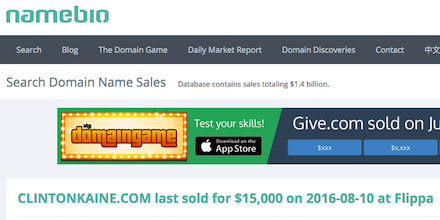 At the time of publication, the domain name is now privately registered. When I looked at the Whois information last night, it showed that it was registered to a Parscale Media. DomainTools has an archived Whois record from 8/12 reflecting this ownership information.

I sent an email to the listed domain registrant last night asking about the  plans for the CintonKaine.com domain name, and I also called this morning and followed up with a second email later on this afternoon. As of the time of publication, I have not heard back.

A Google search for Parscale  shows an article in the San Antonio Business Journal that appears  to connect  this registrant  with Donald Trump’s Presidential campaign: “San Antonio-based web design and marketing firm Giles-Parscale Inc. expects to bring on board up to 100 more employees to support its contract with the Donald Trump for president campaign.”

At the time of publication, ClintonKaine.com does not resolve and I have no idea how (or if) the domain name will be used.

I previously wrote about the TrumpPence.com domain name, which is listed for sale on Flippa. TrumpPence.com currently has a high bid of $1,001, and there are 19 days remaining in the auction. The undisclosed reserve price has not yet been met though.

Thank you to Johnny Rashad for sharing this news with me. Mike Berkens also published an article this evening about the sale of ClintonKaine.com.