Here Are Some of Amazon’s Ring Domain Names

Geekwire announced that Amazon was set to acquire Ring, in a deal valued at $1 billion. Ring is an innovative company, and of course, it operates on the high value Ring.com domain name. If you don’t know about how Ring acquired Ring.com, you will want to read more about it on NamePros, including a 2015 interview with the company’s founder, Jamie Siminoff.

Following the release of the news, Amazon purchased/registered quite a few Ring related domain names. Not only was it smart to register these domain names, but it was even smarter to do it on the day the news broke to avoid tipping off others about the pending acquisition.

One thing of note is that the AmazonRing.com domain name was purchased quite a long time ago. In fact, AmazonRing.com was first registered in 2005, many years before DoorBot (the original brand name of Ring) was founded in 2012. It looks like Amazon has owned that domain name since at least 2007, and the company may have been the first registrant.

Here is an assortment of the domain names Amazon registered since news of the Ring acquisition broke (did not include many variations of ccTLD or alternative extensions):

One thing to note is that Ring already owns its own portfolio of Ring-related domain names, such as RingDoorBell.com, Ring.net, and Ring.CO. I imagine Amazon decided to defensively purchase many of the available Ring-related domain names in alternative extensions. This is smart because it is obviously far less expensive to hand register these domain names rather than try to chase down potential cybersquatters in the future.

On a similar but separate note, I was using DomainIQ to look at some of the domain names that are owned by Ring. Two names stood out to me – GoogleDoorBell.com and NestVideoDoorBell.com. Neither domain name is owned by Ring any longer, but it would be interesting to know why Ring’s founder owned them (as recently as June 2017, according to DomainTools): 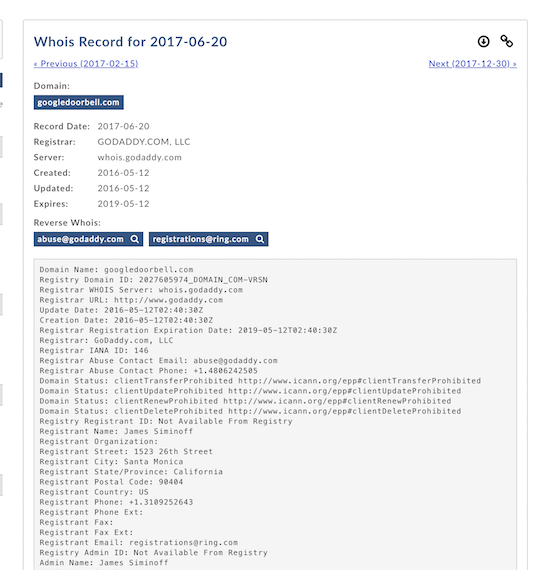