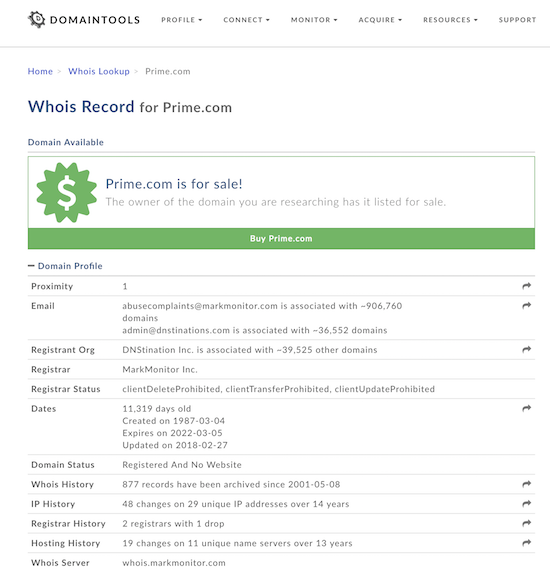 In what might be a sign of a sale, the valuable Prime.com domain name has transferred to MarkMonitor, Inc., according to Whois records at DomainTools. Prime.com is now registered to DNStination Inc., the privacy proxy service operated by the corporate domain registrar. At the time of publication, Prime.com does not resolve to any website.

Ordinarily I wouldn’t write about a domain transfer like this, but because the name is now registered at a corporate brand protection service, it could be the first sign of a major domain name acquisition. I think the most obvious suitor for Prime.com is Amazon, with its popular Prime service. Last year on Prime Day, I wrote about Prime.com and suggested that Amazon acquire the domain name. Prime.com had been for sale in the past with a seven figure price tag, and if anything, the price likely increased since that time. I think Amazon would benefit the most from owning Prime.com, but this would be a killer name for any company called Prime.

If Prime.com was sold (again, this is uncertain), it may not have been acquired by Amazon. There are probably thousands of businesses with “Prime” in their branding. Despite the fact that Amazon operates its own domain name registrar, the company does use MarkMonitor for some domain registrations. In fact, Amazon.com is registered at MarkMonitor, whois records show.

Again, there is no confirmation that Prime.com was sold nor any information about who may have acquired the domain name if it was sold. This is purely speculation based on the transfer of Prime.com to MarkMonitor.

Update: Yes, Amazon did acquire Prime.com. Whois records now show Amazon as the registrant of the domain name and when you visit Prime.com, you are redirected to Amazon’s website. 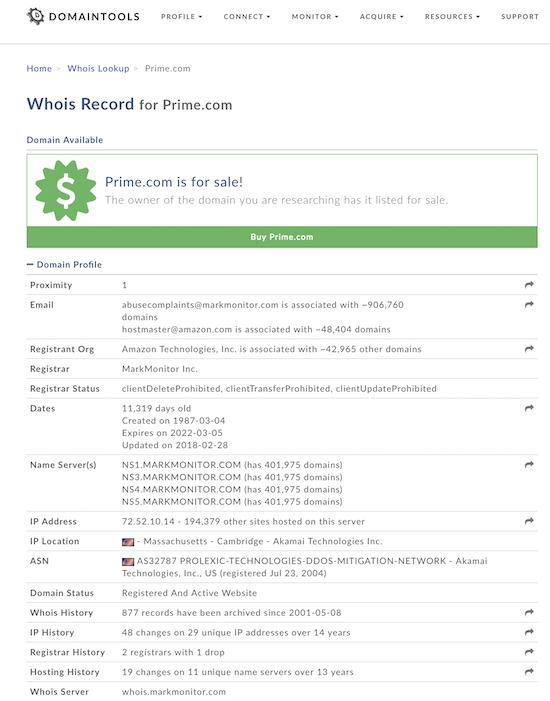