Many years ago when I traveled less frequently than I do now, I had a routine when I got to the airport. I would visit Hudson News or whatever other newsstand was in close proximity, and I would buy a Maxim magazine and a Stuff magazine to read on the airplane. It’s been a long time since I have done that, but I can see that Maxim is still published (at least online), but Stuff is published by a different company with a different theme.

I was looking at GoDaddy Auctions this morning, and I see that StuffMagazine.com expired and is in an auction that will conclude today. StuffMagazine.com was once the home of Stuff magazine. I recall this being notable because Michael Berkens previously owned the brand match Stuff.com domain name. Maxim can be found by visiting Maxim.com.

Prior to its expiration, StuffMagazine.com had been registered to a company called Alpha Media Group INC. Before that, it looks like it was registered to Dennis Digital Inc., the former publisher of Stuff. It looks like the domain name has been used for forwarding to Maxim.com. According to a Wikipedia page about Stuff, the publication was sold and is now a “British consumer electronics magazine,” which can be found online at Stuff.tv.

At the time of publication, there are are 60 bids from 17 different bidders. The high bid stands at $910 with a little more than 2 hours remaining in the auction. 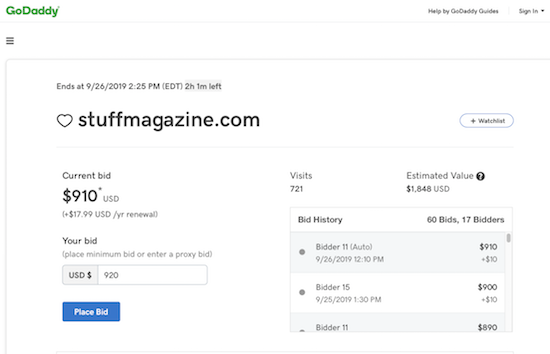