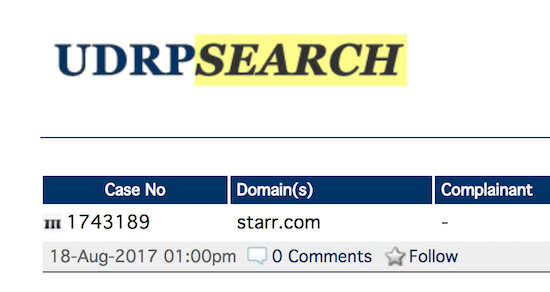 A UDRP was filed at the National Arbitration Forum (NAF) against the Starr.com domain name. The  filing can be seen at UDRPSearch.com, and it is case #1743189.

Starr.com has been registered for over 25 years. It was created in November of 1991, and it has not expired since that time. I don’t regularly see domain names this old, let alone seeing a UDRP filed against a domain name that has existed for so long.

Because the UDRP was filed at NAF, the complainant is unknown at this time. There are so many Google search results for “Starr” that I can’t even take a guess about who filed the UDRP. Starr is a common last name (including that of the founder of the Pan-Mass Challenge), and there are many companies that have “Starr” in their branding. Heck, even Wikipedia’s page about “Starr” has links to over thirty internal pages that people could be interested in learning about when they search for “Starr.” This is just the tip of the iceberg as evidenced by the 899 company results on LinkedIn that are returned when searching for Starr.

From my perspective, when there are so many people, companies, geographic areas, organizations, and other entities with the matching keyword of a UDRP, the complainant shouldn’t be able to win unless there are significantly mitigating circumstances involved. I will be monitoring the progress of this UDRP, but from the outset, I don’t see how the complainant will prevail given the nature and age of the domain name.