A UDRP was filed against the RoseField.com domain name at the World Intellectual Property Organization. The preceding is listed as WIPO Case D2016-2187, and it was filed by a company called Rosefield Watches B.V.

The RoseField.com domain name has a creation date of August 13, 2002, and it looks like it is registered to an entity in Colorado. Historical Whois records at DomainTools show me that the domain name has been owned by the same registrant since at least 2011. I do not see any sale records for this domain name in NameBio. I visited the domain name this morning, and it is showing some sort of real estate landing page with a Foreclosure.com advertisment: 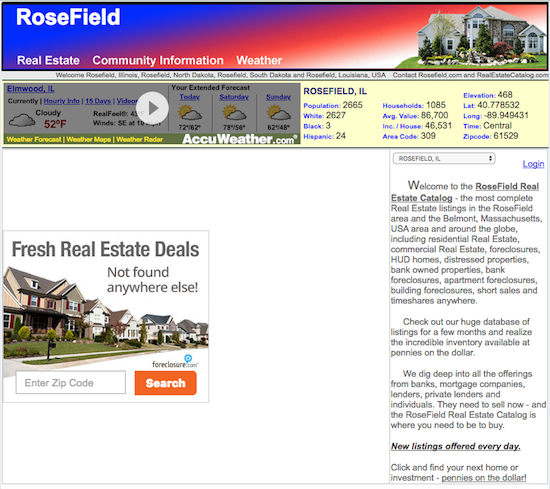 The complainant in this case seems to be a watch company called Rosefield Watches. The company appears to operate on the exact match RosefieldWatches.com, a domain name that was registered in 2014. Assuming it is the same Rosefield Watches, the company’s LinkedIn page says it was founded in 2014.

There are a number of reasons why I don’t see how the complainant will prevail in this UDRP. When I initially saw the domain name, I thought of a “rose field” as in a field of roses. I also noticed that there appear to be geographic areas and developments called Rosefield or Rose Field. In addition Rosefield is a last name. In my opinion, that would suggest this domain name is generic in nature. Additionally, because the domain name was created well before the listed founding date – and the current owner has owned it at least several years beyond that – I don’t see how it could be considered registered in bad faith. Finally, it is being used in a manner that doesn’t suggest is being used in bad faith.

Obviously, I don’t know if there is more to this that I can’t see, so we will need to wait until the UDRP decision is rendered to get the facts. My guess is that this one will go in favor of the domain name owner.

Update: According to UDRPSearch.com, the UDRP has been denied. The decision has not yet been published, so I am not sure of the details. The domain name will remain with the owner. Decision was published: no Reverse Domain Name Hijacking.