Registered in 1996, Fenwicks.com is Subject of UDRP (Updated) 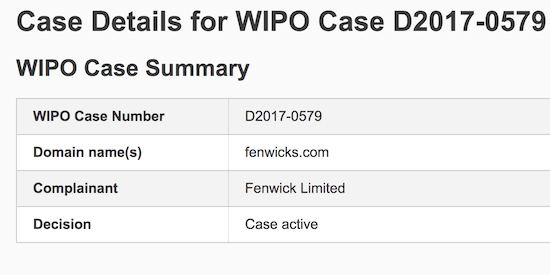 I saw an interesting UDRP filing I want to share with you. A UDRP was filed at the World Intellectual Property Organization involving Fenwicks.com. The case is WIPO Case D2017-0579.

Fenwicks.com was registered in October of 1996, making this domain name more than 20 years old. The domain name appears to be privately registered until just recently, with privacy being removed likely because of the UDRP filing. Now that the Whois record is no longer private, I see that the domain name is registered to a registrant called Fenwick Associates. It appears that the last name of the person associated with this entity is Fenwick.

I used DomainTools Whois History Tool to see how long this entity was the registrant of the domain name. The first archived Whois record for this domain name is 2001. The registrant? Fenwick Associates. It looks like the same registrant has owned it since at least 2001 and almost certainly even longer. In fact, an Archive.org record from 1998 shows Fenwick Associates listed on the bottom of the archived website. I visited Fenwicks.com today, and I only see a default GoDaddy coming soon parked  page.

Update: According to UDRPSearch.com, this UDRP was terminated. I reached out to Mr. Fenwick to see if he can comment. The domain name appears to still be registered to Mr. Fenwick.