Our Story: Aliasing and Times Square 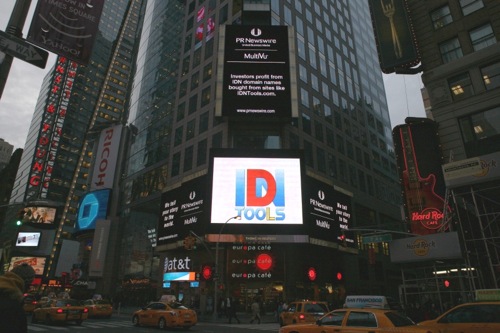 Starting backwards, you’d be stupid to put your name on a company and in a global press release if you didn’t believe in the concept.   When we took out an IDNTools ad on the iconic Reuters billboard in Times Square it was a sign of our confidence in what is to come.   Similarly, when we issued an international press release (link here) briefly explaining why IDNs will be the next big opportunity, we did so proudly with facts to back up our assertions.

So what are the facts?   IDNs are any Internationalized Domain Names that require the use of foreign characters, such as æº§é˜³.com.   The billion plus population in China actually prefers to speak Chinese, type Chinese and read Chinese. Now that they can register Chinese domain names, aka IDNs, they have been taking advantage of the opportunity and will continue to do so.   The same is true for Japan, Russia, and many other countries.   Unfortunately, IDNs became available after the domain rush was well underway, and as such many domainers and businesses still don’t realize that IDN.com’s can be registered.

But why would you want to register a URL that starts in one language and ends in English (i.e. æº§é˜³.com)?   This is certainly not fluid to jump from one language to another.   The retort is twofold.   First, Chuck Gomes of Verisign announced that IDN.com will essentially be “aliased” to   IDN.IDN.   This means that the owner of (Chinese).com will also be the owner of (Chinese).(com-in-Chinese).   There is much value in having an IDN on both sides of the dot.

Even in the interim, before aliasing, IDN.com domains are precious.   After all, .com is a worldwide brand and it is easy for natives to switch between a native language (for the IDN domain) and English (for the .com extension).   In addition, the search volume for an IDN, as measured by the Google Adwords Keyword Tool, is many multiples of the traffic can be bought for a similarly priced ASCII (aka English .com) domain.   For instance, shorts.com in IDN can likely be bought for the price of (insert adjective)shorts.com in ASCII (English .com), and the IDN would be a wiser purchase in terms of having higher search volume and less competition.

If you wonder, why others aren’t buying yet?   They are.   The volume of public weekly sales on IDNForums continues to increase exponentially, and if you keep a close watch on the whois, you’ll see many top tier terms have changed ownership over the last few months, indicating stealth acquisitions. Interest in dropping domains is also taking off as highlighted by the steep increase in subscribers to our IDNDroplist.

No doubt this is a complex niche, and a new reader must have many questions.   So ask them.   Ask them in the comments, email us or Elliot, and we’ll address them in the next post.