NameCheap & Fight for the Future Protesting in Front of FCC Building 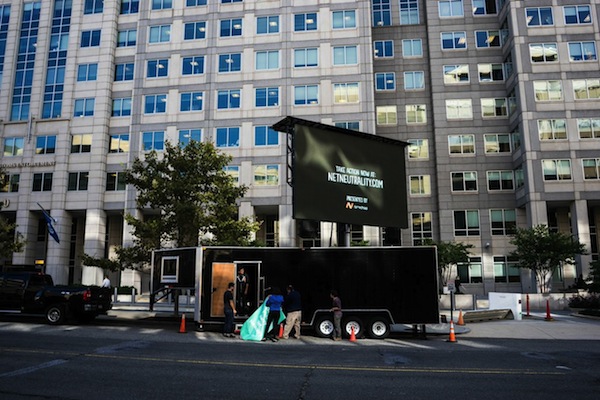 This afternoon, I saw a Facebook post from NameCheap CEO Rick Kirkendall with a photo of a video billboard advocating for Net Neutrality that has been set up right outside of FCC headquarters in Washington, DC. I learned that NameCheap has teamed up on this billboard protest with the non-profit Fight for the Future organization, which organized the Internet Slowdown campaign last week.

Here’s what Fight for the Future has to say about the billboard: “As the hours count down to the FCC’s net neutrality comment deadline, we have obtained a permit to park a truck with a giant video billboard on top directly across the street from the FCC facing the agency’s headquarters! It’s amazing! We’re attracting tons of attention already.”

Another interesting aspect of this is that anyone and everyone is invited to participate in this fight for Net Neutrality, even if they aren’t located in Washington, DC. On the page announcing the protest, Fight for the Future set up a Google Doc submission form for people to submit a link to their own videos about Net Neutrality, and the video will be broadcast on the billboard.

In addition to the billboard, Fight for the Future is organizing a protest in front of the FCC building tomorrow, September 16 from 11:45am – 1pm. Full details about the protest can be found here.

In addition to funding the billboard rental and other expenses related to this protest, NameCheap has also pledged to donate $0.25 to Fight for the Future and the EFF to fight for Net Neutrality. The company also stated, “If we hit 100,000 retweets, we will donate $100,000.” At the time of this post, the retweet count stands at 3,084.

Kudos to NameCheap for advocating on behalf of Internet users who are seeking Net Neutrality.