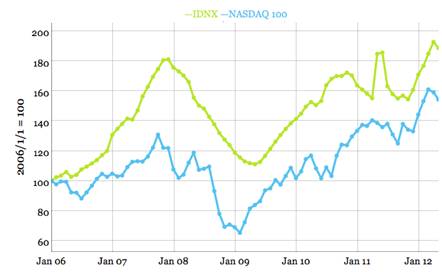 It appears that the domain market hot streak is in more of a holding pattern, at least according to Sedo’s IDNX. A report from Sedo  this morning announced that the IDNX domain price index recorded a 2.1% decline in April, following growth of more than 22% during the last six months.

Sedo reported that there are a couple of factors that may have led to this decline in April:

Comparatively, the NASDAQ 100 index saw a 3.1% decline and Apple stock fell 2.5% (probably because I invested in it). Coincidentally, April was the strongest month of the year for me after recording a few large sales.  I operate on a very micro level though with some  anomalous  sales, so I wouldn’t necessarily think my performance is  indicative  of the overall market.

Hopefully this is just a temporary setback for the domain market.

Sedo’s full release is below:

Sedo, the leading online domain marketplace and monetization provider, today announced the April 2012 results for domain name price index IDNX. After record-breaking highs in the domain market in March, April 2012 experienced a decline of 2.1%. However, given that this drop in domain prices follows growth of more than 22% during the past six months, it mainly indicates that the domain market is still a stable, solid investment for domain owners.

Compared to other stock indices, the domain market saw a relatively small decline. The NASDAQ 100, which tracks the stock prices of the 100 largest IT companies, fell by 3.1%, Apple lost 2.5%, and internet giant Google gained only 0.4%. This glimpse into the the wider economy suggests that people were spending less on domains during April, accounting in part for the fall in the total value of domain sales.

Another factor in April’s 2.1% decline was a small decrease in the number of sales. This is likely due to sellers’ reluctance to adjust asking prices for their domain listings based on decreased demand. Given the strong showing from the domain name market over the past six months, however, domain investors should still look forward to a stable market during the coming weeks and months.

About IDNX
Developed by Massachusetts Institute of Technology (MIT) researcher Thies Lindenthal, IDNX is the first scientific grade price index for the domain market, and is based on over 6 years of Sedo transaction data. IDNX takes into account the inherent quality of domains, and compares the trends in transacted domains to those of other economic indices such as the NASDAQ, bringing more transparency to domain markets. It provides a reliable benchmark for domain name investors and novices alike to determine price trends, investment opportunities, and the value of domains as an economic asset.

About Sedo
Sedo, an acronym for “Search Engine for Domain Offers,” is the leading domain marketplace and monetization provider. Headquartered in Cologne, Germany and with offices in London, England and Cambridge, Mass., Sedo has assembled the world’s largest database of domain names for sale, with more than 15 million listings. The success of Sedo’s model has attracted a global membership base of more than 1 million domain professionals.

Did Domain Name Give Away Washington NFL Rebrand?