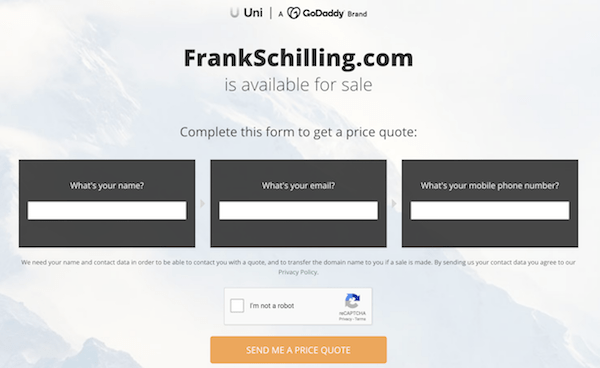 If you know of someone named Frank Schilling, now might be a good time to let him know that FrankSchilling.com is now for sale. The FrankSchilling.com domain name is now listed for sale with a Uni / GoDaddy purchase inquiry landing page.

Using Screenshots.com (a DomainTools service), I can see that it had been parked before but there was no “for sale” link as is common on Uniregistry-parked domain names. It also looks like Frank Schilling had previously used the domain name, possibly as a forwarder to his once popular Seven Mile blog.

Up until recently, FrankSchilling.com had been owned by domain investor Frank Schilling’s Name Administration company, which was acquired by GoDaddy earlier this year. Because of the recent Whois record change at GoDaddy, the only thing I can see is that the registrant is based in Grand Cayman. There is no registrant organization listed in the Whois record, so it is unclear if GoDaddy acquired FrankSchilling.com or if Frank retained this personal domain name.

Whatever the case may be, FrankSchilling.com is now listed for sale, and it would be the perfect domain name for someone named Frank Schilling.