This morning, I read about  a credit card startup called Final. According to its Crunchbase profile, “Rather than a single, static number, Final card generates multiple numbers which the consumer can restrict, and manages them automatically.” The concept seems like a fantastic idea, and I would certainly be interested in using their service when given the opportunity.

One thing that I found interesting is that the company is currently using GetFinal.com for its website instead of the brand’s exact match Final.com domain name. Obviously, Final.com is an exceptional domain name, and given that it is a one of a kind, one word .com domain name, the acquisition cost would be very high. The registrant appears to be a New York based company, and the domain name is currently listed for sale on Sedo, although it does not have an asking price or a price guideline. According to the listing, there have been 12 previous offers for Final.com.

In my opinion, the company should really get the Final.com domain name, even though it will be expensive. Many prospects and customers may automatically directly navigate to Final.com assuming that is the credit card company, and they wouldn’t find their intended destination if they do that.

The concept behind Final is awesome. Hopefully they will have great success with their business. I think upgrading to Final.com will be helpful in the longrun. 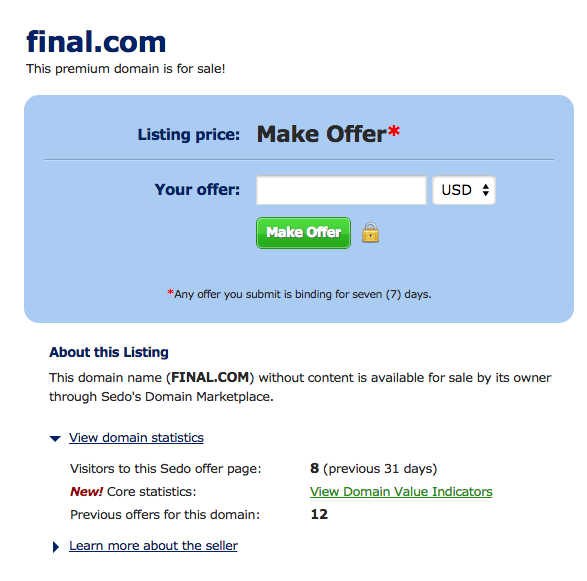