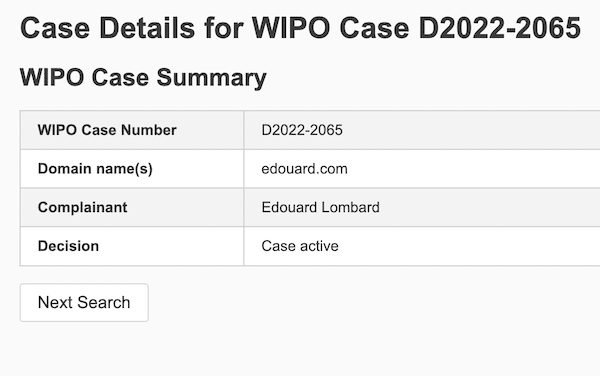 A UDRP was filed at the World Intellectual Property Organization (WIPO) against the Edouard.com domain name. The complainant in the UDRP is listed as Edouard Lombard. This is WIPO Case D2022-2065.

Edouard.com was created in 1998 – nearly 25 years ago. The domain name does not currently resolve to an active website, and the Whois record shows “Statutory Masking Enabled” as the domain registrant due to GDPR regulations. Historical Whois records at DomainTools show the domain name was owned by a person named Edouard as recently as May of 2018 before GDPR masking of the Whois record.

Backing this up, you can see historical views of the website on Archive.org that appears to be the same Edouard. The earliest snapshot of Edouard’s website is from April of 2000 – more than 20 years ago! From what I can see, this domain name appears to have been owned by a person named Edouard for a very long time.

Edouard may not be a common name in the US, but a look at LinkedIn shows it is a pretty common first and last name. In fact, when I did a “People” search at LinkedIn, it returned 91,000 results:

From my outside (and non-legal) perspective, it looks like a guy name Edouard is trying to wrest control of the Edouard.com domain name from someone else named Edouard who has owned it for a very long time. Of course, this won’t be confirmed until the UDRP proceeds and the registrant’s name is known. Assuming it wasn’t sold since GDPR went into place, hopefully the panelist will see that this case involves one person named Edouard who is using the UDRP to try to get Edouard.com from another person named Edouard.