Only 875 days left until Mayor de Blasio's term comes to an end. Count down with us! http://t.co/i5lmI83wXa pic.twitter.com/0hAF6zngTi

I was checking out the NY Post this afternoon, when I scrolled to the bottom of the homepage and saw a creative use of a new gTLD domain name. As you can see below, the NY Post has a banner with a link to the website DeBlasio.Fail. Bill De Blasio is the sitting Mayor of New York City.

When you visit DeBlasio.Fail, you see a heading at the top of the website that says, “DE BLASIO COUNTDOWN CLOCK“, and there is a clock ticking down the time remaining in Mr. De Blasio’s current term as Mayor.

On the  DeBlasio.Fail website, you can see a New York Post logo in the bottom left hand corner. The domain name is registered privately, so I am not sure how the publication is associated with the domain name and website.

It seems like a pretty amusing usage of a new gTLD domain name. It is also interesting that a .Fail domain name was used rather than a .Sucks domain name. It looks like DeBlasio.Sucks is also registered, but it resolves to a 101Domain landing page. I guess .Fail is more of an opinion about the Mayor’s time in office, while .Sucks could be seen more as a personal attack than criticism of the Mayor. I no longer live in NYC, so I don’t know enough about the Mayor to have formed an opinion about him or his time as Mayor.

.Fail is a new gTLD domain name operated by Donuts. There are currently fewer than 3,000 .Fail domain names registered. It will be interesting to see if .Fail is given any kind of boost by this exposure.

Gothamist published an article about the DeBlasio.Fail website if you want to learn more about it. 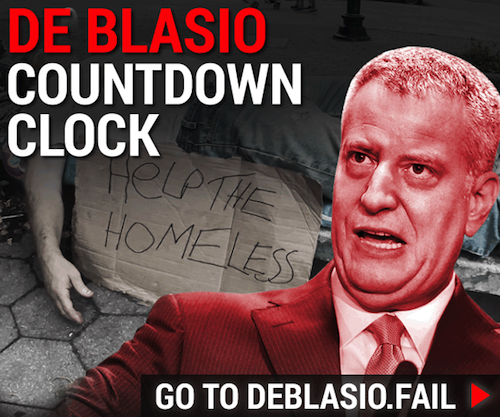