Could Facebook Launch a Mail Service on FB.com? ** Updated **

At the end of September, I wrote an article speculating that perhaps Facebook purchased FB.com in private. There hasn’t been any public acknowledgement about whether the company bought it or not (or who may have bought it if Facebook didn’t), and the domain name still does not resolve.  See update below.

Multiple websites are reporting that Facebook will be holding an invite-only event in San Francisco on Monday, November 15th, and it is expected they will announce a new email system or platform that Techcrunch has dubbed “Facebook’s Gmail Killer.” According to the folks at Techcrunch, this project has been referred to internally as “Project Titan.”

This is pure speculation, but it would be pretty neat if they launched this mail service on FB.com (if they own this domain name now confirmed that Facebook owns it). Assuming it is a mail service they intend to launch on Monday, they could also use another name like FacebookMail.com (which they already own), or they could just tie it in with Facebook.com.

In my opinion, launching a mail service on FB.com would be a great idea. I am sure there are still plenty of people who still think Facebook is just for social networking, despite the company’s growth and evolution. By using FB.com, they could somewhat disassociate from the Facebook brand, which could make a mail service @FB.com look more professional and serious. I think it would look strange to receive a job application from someone emailing me from Facebook, perhaps somewhat unprofessional in my opinion.

Google moved away from the Google name when it started its GMail platform, and I think it would be a smart idea for Facebook to use FB.com for mail, if they did in fact acquire the domain name.

As Andrew pointed out within the last hour, the Whois information for FB.com has changed, and Facebook is now listed as the owner (see screenshot below).  Additionally, FB.com is now forwarding to Facebook.com. 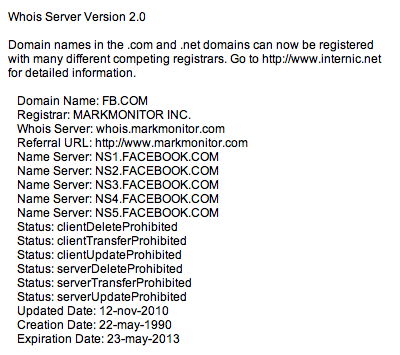