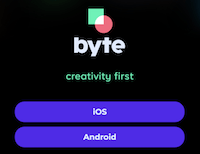 The hot new app being talked about quite a bit in tech circles and on Twitter this weekend is called Byte. Billed by some news outlets as a “successor” to Vine, Byte is a six second short video app that was created by Dom Hofmann, the co-founder of Vine. Interestingly, Byte can be found on the Byte.CO domain name, exactly like Vine was found on another .CO domain name, Vine.CO. Vine was shut down in 2016.

It looks like Byte.CO was originally registered in 2010 by a registrant in Iran. In 2014, the domain name Whois record was registered under privacy proxy, and it emerged from private registration in either late 2018 or early 2019. I looked at NameBio, and I do not see any public sales history for this domain name, so it is unclear when it sold or how much it cost to acquire.

The brand match Byte.com domain name currently resolves to a 403 error page with a “Forbidden” error message on it. Whois records show that domain name is registered to a different entity called United Business Media LLC. It appears that Byte.com had been used for a publication called Byte Newsletter. Interestingly, I believe the registrant had owned some 3 letter .com and other assorted domain names that were listed for sale (see screenshot from Screenshots.com), but I don’t see that Byte.com was one of those domain names.

Because Byte.com is not really being used right now, I could see the domain name becoming an acquisition target should Byte take off as much as Vine did. Byte.com is quite valuable, and if the registrant would sell the domain name, it will almost certainly have a hefty six or seven figure price tag due to its meaning beyond the video app. The Vine video app never acquired Vine.com, at least partly because that domain name was owned and being used by a major company (Quidsi, which was acquired by Amazon).

I will keep my eye on the Byte.com Whois record to see if it changes hands, but for now, it looks like another .CO domain name is going to be in the spotlight.

Elliot Silver - November 29, 2022 53
For the past few years, Swetha Yenugula has regularly and frequently shared her .XYZ domain name sales. The value of her sales coupled with...