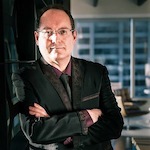 Bill Sweetman is probably one of the most recognizable people at a domain conference, and he is someone whose opinion is always valued when it comes to the domain industry. Since 2007, Bill has worked at Tucows, and his current role is Vice President, Domain Portfolio at Tucows and General Manager of YummyNames.

This afternoon on his blog, Sweetmantra, Bill announced his resignation from Tucows to start his own domain name consulting firm. Bill cited the upcoming launch of new gTLDs as a reason for his starting own firm, as well as the fact that hundreds of millions of more people will be going online in the coming years. Bill’s final day at Tucows will be April 26.

Bill is going to parlay his experiences into a “boutique domain name consulting firm,” and he intends to launch it later on this quarter.

There are a number of top tier domain consultants and consulting companies, and I think it’s great that Bill is making the move to launch his own firm. I wish Bill all the best, and look forward to hearing about it once the details are announced.

Congratulations to Bill and wishing him all the best.