AAF.com, Used by Alliance of American Football, is Pending Delete

The Alliance of American Football (AAF) was a professional football league that played part of a football season in 2019. According to Sports Illustrated, AAF filed for bankruptcy in 2019. The league used the valuable AAF.com domain name for its website while it was operational and for sometime after its bankruptcy. Whois records now show that AAF.com expired, and the domain name is now in pending delete status.

Here’s a screenshot of the current Whois record, courtesy of DomainTools: 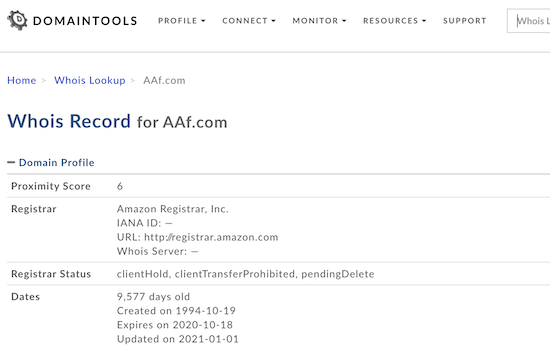 Because the domain name is in pending delete status its registrar, Amazon Registrar, I do not believe AAF.com can be renewed by the registrant any longer. This means that drop catching services such as DropCatch.com and SnapNames will compete to catch the domain name as soon as it completely drops. Assuming one of these services catches the domain name, it will be auctioned on their platform to the highest bidder.

At the present time, AAF.com has 274 bids for this domain name at NameJet, not counting bids at its partner, SnapNames. The highest proxy bid is not shown until the auction for the domain name is started. DropCatch.com does not reveal the number of bidders prior to the auction start.

I would not be surprised to see this domain name sell for anywhere from mid-five to six figures once the domain name is caught and auctioned.

Share
Email
Facebook
Twitter
Linkedin
Previous article
How Do You Rebut an Appraisal from a Prospect?
Next article
The Hunt is Fun, but Validation is Critical