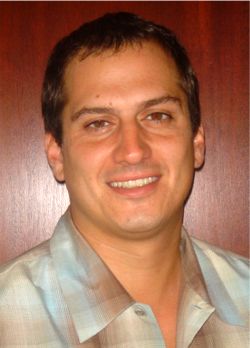 Rick Latona, a self-proclaimed serial entrepreneur, has been making waves in the Internet business since there was one. In the mid to late 90s he was an executive at Interland, Inc (now web.com) a hosting company which he helped take public. He owns an outsourcing company (Offshoring.com) with offices in The Philippines and India which employs nearly 2,000 people and was the first person to loan money on domains when he launched DigiPawn.com in 2003.
Rick is now one of the largest portfolio holders of “trophy” domains which is constantly changing due to deals he is making. His email announcements of “daily domains” has been averaging $200,000 a week in sales. Many of Rick’s domain transactions have made DNJournal’s weekly sales report, several coming in at the top of the list.

1.) EJS: You’ve acquired some fantastic domain names and you have a huge staff of programmers, designers, writers and developers at your disposal. Why not keep and develop your premium domain names instead of selling them?
RL: “I do. Well, sometimes I do. It’s all about capital really. I’m spending over one million dollars a month on names so for one thing it’s hard to keep doing that without selling a lot of them at the same time. I don’t have the high PPC income that most of the other big players have.
I also develop names then sell them. Some examples are SkiResorts.com and SanJuan.com which are both in the 2008 TRAFFIC auction in Vegas coming up soon. Often I put a simple 1-5 page site up like Trusts.com which is in the same auction. It’s search engine optimized and Trusts.com is currently number 1 on Google for the valuable keyword “trusts”. It’s officially ready for auction.
I buy developed sites and sometimes keep them and other times sell them. Take efs.com for example. That site has been live for 10 years and ranks really well in Google for many electronic filing service related key terms. It does about 35,000 dollars a year in revenue. It’s more than a LLL.com but nevertheless, it’s going in the same TRAFFIC auction.
I hope the bidders recognize the value!
I’m a firm believer in the time value of money. If I can sell something at a healthy profit and put that money into a bigger asset that would make a bigger profit, I’m better off than if I had kept that first asset.
I think, more than anything, one has to create a style in business that reflects their personality if they expect to exceed. I love to cut deals. I love to buy. I love to sell. That’s who I am.”
2.) EJS: As it gets more and more difficult to acquire premium domain names, can you share any of your techniques to acquiring the best domain names at reasonable prices?
RL: “Not without doing something to you and your readers which would cause me to go to jail.
Seriously, I work hard and I have a team that works even harder. We strategize constantly and in so doing have come up with techniques that work for us and are ever changing.”
3.) EJS: At what stage should a domain investor consider hiring staff from Offshoring.com, and what type of management experience does the investor need to have to get the most from his Offshoring.com staff?
RL: “If they are doing any development or maintenance at all they should consider hiring staff from Offshoring.com. As I mentioned above, I develop big sites, maintain sites that were already developed, throw together small sites for SEO purposes and all kinds of other things. It’s great to have the freedom and flexibility that inexpensive programmers, writers and designers can provide.
We only rent the staff to the client so the client is ultimately responsible for the day to day task assignment and basic management. That said, we have shift managers walking around making sure people are working and the client will have their contact information in case they need the shift manager to get involved. Also, for clients that have 10 or more employees with us, we give them a free full-time dedicated supervisor for their staff.
Incidentally, we are by far the largest outsourcing company that caters to the domain industry. Many of your readers are already valued customers of ours.”
4.) EJS: What accomplishment are you most proud of in the domain business?
RL: “I started registering names back in 1996 but suddenly stopped after only a few of them. My sister had told me it was unethical. The agony of that decision will live with me forever.
I never stopped watching and thinking about domains as I went on to do other things in the Internet world.
When Kevin Ham bought Spanish.com from me right before Rick Schwartz and Howard Neu through their first convention a few years ago in Delray Beach I watched what he did with the name. It was only then that I found out what parking was! I went to that convention and started to get more involved. I’ll never forget Kevin telling me that if I was going to stay in the business I should have kept Spanish.com. I think I’m proving him wrong.
I felt a sudden fire lit underneath me and started getting more and more aggressive as domains took a higher priority in my business life.
It was really only 2 years ago that domains took a top priority.
What I’m most proud of is that I now consider myself one of the best in this business and I feel like I’ve gotten here in a very short amount of time even though I’ve always been here. I know in my heart that I’ve only really been doing this for 2 years.”
5.) EJS: Other than domain names, what are your five favorite things?
RL: “I have Offshoring.com, my outsourcing company, Digipawn.com, my loan company, two projects under development which I can’t talk about and of course my family.”
*Photo credit: DNJournal

5 with Jen Sale, Co-Founder of Evergreen