A UDRP has been filed against the valuable Grandstand.com domain name at the World Intellectual Property Organization. This UDRP filing is WIPO Case D2017-1709.

Grandstand.com was created back in March of 1995. In 2011, the Whois record for domain name went private, so I am not sure who currently owns the domain name. I believe Whois privacy will be removed because of the UDRP. Prior to the domain name becoming privately registered, Grandstand.com was registered to a company in North Carolina. A DomainTools Whois History search shows that this company was the registrant since at least 2001 (there are no Whois History records from before that time). 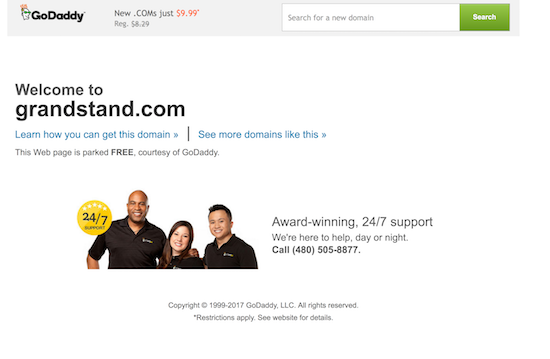 Grandstand.com is a fantastic domain name that I would be happy to own, and I would consider it a high value asset. The domain name has multiple meanings, and Dictionary.com shows that it is a noun, adjective, and a verb.

I would be curious to know if the complainant tried to acquire Grandstand.com before filing the UDRP. Some companies seem to use the UDRP process as a “plan B” when they are either unable to come to terms to buy a domain name or can not get in touch with the domain registrant.

I don’t see anything obvious that would indicate the domain name was registered and/or is being used in bad faith, which would be a requirement to win the UDRP proceeding. There are other requirements as well, but I don’t see anything obvious that would prove this aspect. There could be mitigating factors that are not obvious to me, so we shall see how this plays out when the UDRP is decided.

Update: Complaint was denied, and the panelist ruled that this was a case of Reverse Domain Name Hijacking (RDNH):

“But as with any other Policy element a panel’s consideration of whether a party has abused the administrative proceeding should be based on evidence or, as in this case, lack of evidence, and not upon any subjective sense of the complainant’s motive. On any objective analysis the fact remains that the Respondent has been put to time and trouble to defend a proceeding the Panel considers groundless. Even the Complainant’s research, selective and cursory as it is, demonstrates an awareness of the Respondent’s prior commercial structure and its activity in an unrelated and noncompeting field. This, together with the fundamental flaws in the Complainant’s case and lack of proof on key Policy elements, convinces this Panel that this Complaint should not have been brought, and the Complainant and its professional representative should have known it.”

Elliot Silver - June 28, 2022 14
I list nearly all of my domain names for sale on both Dan.com and GoDaddy (via Afternic). The domain names mostly resolve to Dan.com...