Earlier this week, Sahar Sarid announced a new venture called DomainingAMA.com. Visitors will be able to ask questions of the participants, and the format will be similar to that of a Reddit “Ask Me Anything” interview. Here’s what Sahar said about DomainingAMA on Facebook:

“Next Monday. 3/28, I’ll be releasing a new platform called â€ª#â€ŽDomainingAMAâ€¬, it is a Domaining spin on Reddit AMA and for five days a week at noon, est., we will feature one person per day to share and give their all with our community. â€ª#â€ŽDomainingâ€¬ will never be the same.”

For those of you who have been involved in the domain space for at least a few years, you probably recall Sahar’s popular domain industry blog, Conceptualist.com. Sadly, the blog is no longer in use, but there was some great information when it was active several years ago. Sahar has done very well in the domain space, and his company owns some exceptional domain names (most under privacy from what I understand).

DomainingAMA.com is scheduled to launch a week from tomorrow, and Sahar published a list of the first five partipants: 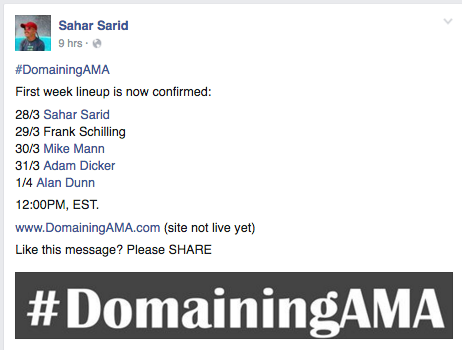 Sahar has made many contacts in the domain space, and it will be great if he is able to get participation from some of the people who maintain a low profile in the domain industry. It will also be interesting to see if people are really willing to answer any question that is asked.