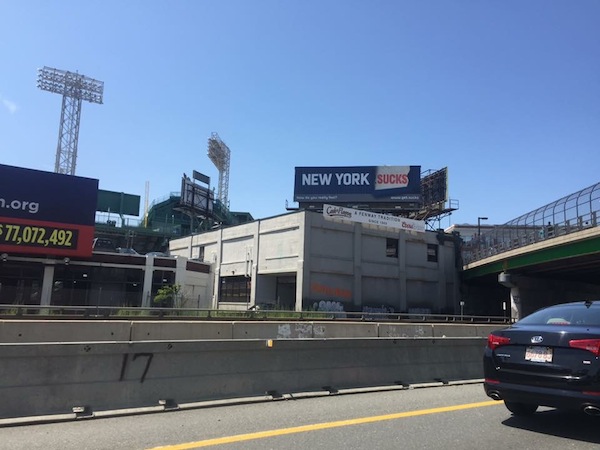 Boston Business Journal published an article about the NewYork.Sucks billboard that is currently displayed on the side of the Mass Pike, behind Fenway Park. For those who aren’t aware, the Boston Red Sox / New York Yankees rivalry is one of the better sports rivalries, although it is in a bit of a lull lately.

According to the Boston Business Journal article, “The company that owns the rights to the .sucks generic top-level domain, Cayman Islands-based Vox Populi, is behind the campaign.” You can see a photo of the billboard in the article

I think it’s an interesting campaign, but I would have made a couple of changes:

From my perspective, it is difficult to tell that NewYork.Sucks is a url and isn’t simply a proclamation that “New York Sucks.” If people miss that, they aren’t going to visit NewYork.Sucks since the vast majority of people (in my opinion) do not know .Sucks is a domain extension. I think they may have benefitted from putting a small www. or http:// before NewYork.Sucks to ensure that the message is seen.

Saying “New York sucks” is a bit passe these days. Maybe it’s because I lived in NYC for 10 years before moving back to New England, or maybe it’s because the rivalry has calmed down in recent years, as covered by Boston.com last week. If the registry really wanted to get attention, they might have considered a “Boston.Sucks” billboard instead. This would most likely have drawn much more media attention and attention from drivers. After all, I think the campaign is about drawing attention to .Sucks. Perhaps putting a Boston.Sucks billboard wouldn’t have been allowed by the billboard owners, so this may be a moot point, but it probably would have been more attention grabbing.

Overall though, I love the fact that the registry is helping to promote its extension to public. It’s difficult to create awareness about the new domain extensions, and this was a creative way to do it. I especially like the idea of the Traffic.Sucks billboards, which everyone can relate to without offense.

Photo courtesy of Linda Ledbetter, sent to me by Mike Sallese (with her permission to publish).