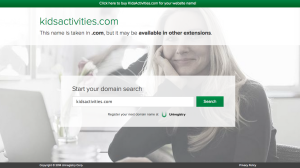 I stumbled across an interesting landing  page that I want to share with you. KidsActivities.com is a domain name owned by Frank Schilling’s Name Administration. It had previously been parked with traditional pay per click revenue generating links as well as an orange “for sale” call out at the top of the landing page. Right now, it’s almost completely different.

In place of the PPC links, Schilling has put a call to action to encourage visitors to search for domain names ending in a new gTLD extension. The main message on the page says, “KidsActivities.com This name is taken in .com, but it may be available in other extensions.” Below this message is a search bar to search for available extensions at Uniregistry, the domain registrar owned by Frank Schilling. On the top of the landing page, there is a message announcing it’s for sale, but it’s much less of a call out than the standard orange bar found on most other DNS-parked landing pages.

I reached out to Schilling to inquire about the new landing page, and he was kind enough to share some more details. “We are trying many different implementations to see what works best,” Schilling told me. “Some of these names will only make $13 a year on parking but if we sell 2 domain names during that year we can generate more revenue than parking. The return on some names is just phenomenal.”

For many names in my portfolio, I’ve gotten rid of PPC links and send the traffic to an inquiry form. I assume many people visit a domain name to see if it is available, and I make it abundantly clear that it is. For me, I would rather make it clear that the name is for sale and forego the little revenue some of the names generate.

For Schilling’s company, he may end up making more revenue if someone buys a domain name in another extension. Not only could he sell them the name from his registry, but if they build on their alternative domain name, there’s a good chance there will be traffic leakage to the .com, which could be monetized. Additionally, these people and companies may eventually feel the need to buy the .com.

Schilling let me know that losing these PPC links isn’t having an impact on his bottom line as some might expect. “Our research is showing it grows the pie it does NOT cannibalize it as some have thought,” he told me.”  It’s all a part of experimentation to grow the pie.  We have said for a long time that PPC rates across many verticals have gotten so low that there is more money to be made selling names themselves. That has finally happened on certain names/traffic.”

I assume this landing page may become available to people who have signed up for the Uniregistry affiliate program. I am told that affiliates will earn revenue on the initial sale as well as renewals and inbound transfers.

Elliot Silver - November 29, 2022 71
For the past few years, Swetha Yenugula has regularly and frequently shared her .XYZ domain name sales. The value of her sales coupled with...