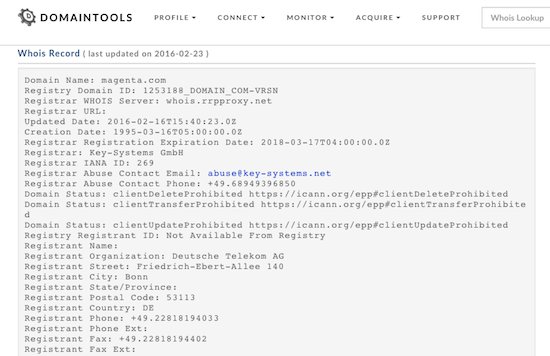 The largest public domain name sale reported by DNJournal last week was Magenta.com, which sold for $100,000 via DomainNameSales.com. Although I am sure it will be surpassed because it is only February, this $100k deal currently ranks as the 7th largest sale of the year on the DNJournal year to date sales report. According to DomainTools, Magenta.com is now owned by Deutsche Telekom AG.

If you visit Magenta.com right now, the domain name does not seem to resolve. I assume that is temporary because of the cost of the acquisition.

Deutsche Telekom seems to have branded  the “magenta” color, although I am not  very  familiar with the German company. In the US market (and elsewhere), Deutsche Telekom owns a majority of T-Mobile, and it has gone to court over the color magenta. According to a Washington Post article from 2014, “a federal judge has sided with T-Mobile in a recent trademark lawsuit, saying that Aio Wireless, an AT&T subsidiary, isn’t allowed to use colors resembling T-Mobile’s promotional ‘magenta’ color.”

I like this sale for several  reasons.  I always like to see public, six-figure domain name sales reported. I think large sales can help boost the aftermarket and show that it is healthy. It is also  nice to see a keyword .com domain name sell  for six  figures. In addition, I am happy to see a large company acquire a domain name rather than trying to abuse the UDRP process. I highly doubt the company would have had a chance at winning a UDRP, but that hasn’t stopped other companies from trying to abuse the UDRP system.

I also like this deal for a  personal reason. My company owns Lilac.com and I have received dozens of inquiries and offers. When discussing a deal with prospective buyers who inquired about Lilac.com, I previously only had the $65,000 Violet.com sale as a comparable to share. I can now show them that another purple hue .com  domain name sold for  a 6 figure price tag.

It will be interesting to see how Deutsche Telekcom decides to use Magenta.com. In the meantime, it is another solid aftermarket reference point.

How You Can See if Someone is Paying at Dan.com

Elliot Silver - May 18, 2022 2
When you win a domain auction, the domain name should be pushed to your registrar account within a reasonable amount of time after paying....

Elliot Silver - May 18, 2022 0
If you are a domain investor on Clubhouse, you will want to tune in to this event. Krista Gable will be hosting an Ask...