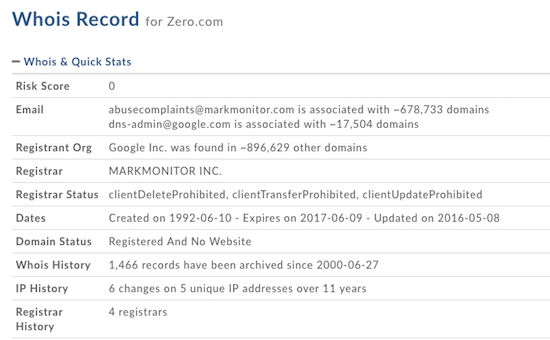 Previously, Zero.com was registered to DNStination Inc. I believe this is the privacy service used by some registrants at the MarkMonitor domain registrar.

According to NameBio, “ZERO.COM last sold for $329,420 on 2010-10-24 at SnapNames.” Within a few months after the domain name changed hands in 2010, the domain name was registered to DNStination Inc. at MarkMonitor, according to a historical Whois record from March of 2011 archived at DomainTools. I believe the registration details for this domain name remained the same until this week, when Google became the registrant.

At the time of publication, it does not appear that Zero.com is being used. I also don’t see any record of an active website on Zero.com in the last several  years, according to Archive.org.

Although my guess is that Google was the owner before and this information became public as a result of the recent UDRP filing, I do not know this for certain. I suppose it is possible that the acquisition was recent, but I highly doubt that given that the domain name is currently the subject of a UDRP.

It is going to be interesting to see what happens with this UDRP and whether any type of litigation will follow.