Of course, I was curious to see how long ago it was that she acquired Martha.com, a domain name that was registered back in 1997. Based on what she said, it sounded like Martha Stewart or her company had Martha.com for a long time and was teasing Stephen about not having his first name domain name – “you don’t own Stephen.com?!”

It appears that there is more to this story. According to the Whois History tool at DomainTools, Martha.com was long owned by Digimedia. In fact, I tweeted about the change of registrant when a Registrant Alert email showed the domain name had changed hands in 2021. Here’s a screenshot of a Whois record from December of 2020: 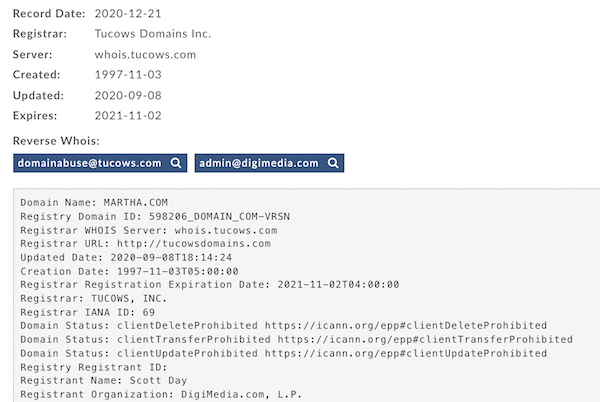 In addition, you can visit Archive.org to see Digimedia’s Yeah.com landing page on this Archive.org entry from late 2020.

My guess is that Martha Stewart’s PR team mentioned the somewhat recently launched Martha.com website as a discussion topic during the bit. Giving her the benefit of the doubt, but it is possible that Martha Stewart did not realize Martha.com was a recent acquisition her company made in the last couple of years.

Acquiring Martha.com was a wise move by Martha Stewart and her company. I would imagine Martha Stewart is the most prominent Martha many people have heard about. However, another Martha or another company called Martha could have acquired and used Martha.com. With the acquisition, the company has locked up the Martha branding which will likely outlive the 79 year old.

It’s too bad Colbert didn’t ask how much Martha.com cost. Knowing who owned the domain name previously, I am sure the price was commensurate with its value.

Thanks to Chad Ellis for sharing this segment with me.