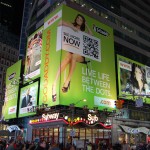 I noticed a Twitter update by GoDaddy CEO Warren Adelman, and I wanted to share it with you. Go Daddy has several very large billboards in Times Square, which were erected last week (click image to see full size). By the looks of it, the billboards are on 42nd Street near the intersection of 7th Avenue and Broadway, which is certainly a high traffic area.

This billboard campaign is  reminiscent  of the Times Square billboard created by the .CO Registry, although this campaign appears to have a much greater presence.

With two Super Bowl advertisements on tap, this is even more exposure for Godaddy and the domain name industry. If people know it’s easy to buy domain names, they will likely be more inclined to try and buy premium aftermarket domain names, many of which are owned by domain investors, and some of which may be listed for sale on Go Daddy’s website. This  is certainly good for those of us who invest in domain names.

Since I don’t visit Times Square very often, the accompanying photo was not taken by me and I have not seen the billboard in person.