I shared the story about how GoDaddy invited me to be their guest at a NASCAR race at New Hampshire Motor Speedway back in September. I also shared the fun story about how my picture was used on the back of Danica Patrick’s race car in her last race in the GoDaddy #10 car. I want to share another brief story illustrating GoDaddy “going the distance” for me.

Shortly after seeing the race car with my photo on the back, I reached out to my contacts at GoDaddy to ask if I could buy the back panel of the car to display in my office. I figured it would be a long shot, but there would be no harm in asking. I reached out to Paul Nicks and Nick Fuller, and they both told me to connect with Paula Hozza, Director of Corporate Sponsorships at GoDaddy.

I got in touch with Paula, and she let me know that she would see what she could do. Shortly after contacting Paula, I was told that it might be a possibility to get the back panel (called a rear tv panel) of the car because it was the last race of the season. A couple of weeks ago, Nick Fuller emailed me to let me know the rear tv panel was shipped to me from Stewart Haas Racing and I would get it soon.

Here’s a photo of the back panel from Danica Patrick’s car, which now sits in front of my office desk. Thank you to my friends at GoDaddy for #GoingTheDistance for me. 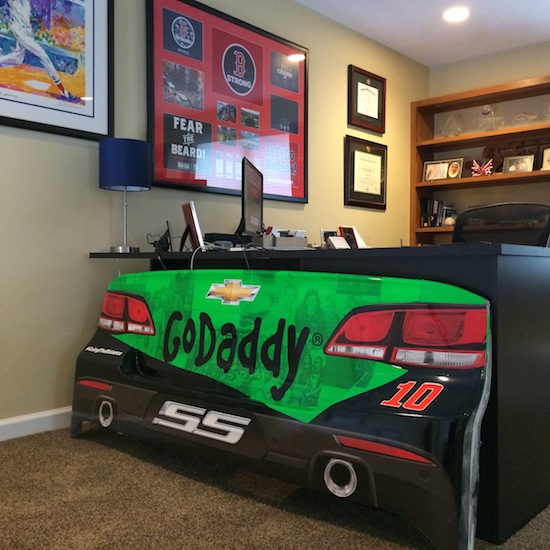 Have You Bought Crypto Domain Names?