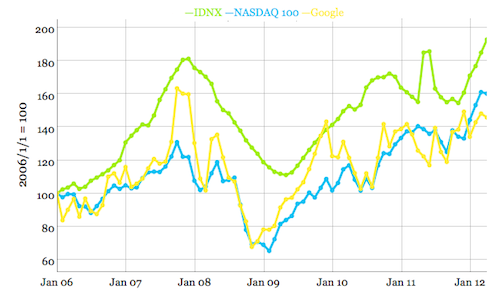 This information is corroborated by a new report issued by Sedo  this morning. According to data from Sedo’s IDNX, the domain aftermarket saw its fifth  consecutive month of growth last month. The report suggests that the market has seen “a  full rebound from 2011’s financial crisis.” The report also suggests that the remainder of 2012 could be even stronger, although we should all keep in mind that Sedo distributed the report and so there may be some bias.

I have posted the full report below, but this is undoubtedly good news for domain investors who own very good domain names. It also could be a good time to invest in good domain names since there are plenty of owners who need liquidity and have priced their names to sell.

Press release is below:
Sedo, the leading online domain marketplace and monetization provider, today announced record high prices in the domain name industry, based on the latest figures from IDNX, the Internet Domain Name Index. IDNX has shown consecutive growth over the past five months, indicating a full rebound from 2011’s financial crisis, and suggesting that the remainder of 2012 could see even stronger figures.

March showed an increase of +4.2%, which follows a similar during February. This growths exceeds the more modest upswing for share prices in the IT and technology sectors. In spite of strong increases, domains still show a strong correlation to fundamental factors in the market, proving that they are at a high without being inflated. Domain prices only slightly outpaced the prices of IT stocks or increases in advertisement revenues, and now rest just above the historical equilibrium.

Alongside higher prices during March, there was also a strong increase in the number of transactions taking place on Sedo’s domain market. This, along with the significant increases over the past five months, suggests that demand for domains has bounced back strongly.