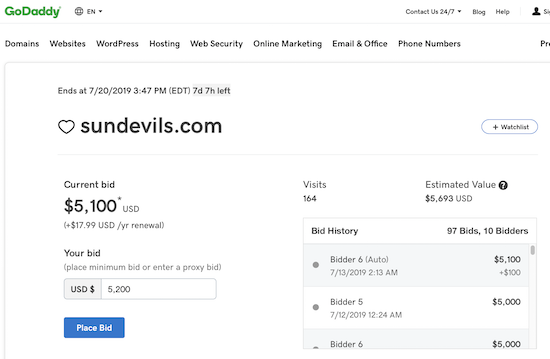 It looks like Arizona State University Athletics Department let the SunDevils.com domain name expire. Arizona State University (ASU) athletics teams are known as the Sun Devils. As a result of the expiry, the domain name is now in auction at GoDaddy Auctions. The current high bid is $5,100, and it looks like there are six bidders participating in the auction. The auction ends in one week.

From what I can tell using DomainTools Whois History tool, ASU acquired the domain name in mid-2011. This came shortly after the University won a UDRP decision involving the domain name. In August of 2011, the registrant organization was listed as Arizona Board of Regents. The domain name is currently registered to Arizona State University Athletics.

Despite having the Sun Devils nickname matching domain name, it does not look like ASU has used SunDevils.com for a website for at least a couple of years. Using DomainTools’ Screenshot tool, I can see a Sun Devils athletics website from 2012 through early 2016. At that point, the website was no longer operating on SunDevils.com, and the domain name showed a default GoDaddy landing page in its place. I am not sure why the University stopped using SunDevils.com for its website, but at the very least, I think the domain name should be used as a forwarder to send traffic to the actual Athletic Department website.

Strangely, it looks like ASU is using TheSunDevils.com for its Athletics Department website, so perhaps there is more to the story that I am missing.

Should the domain name not be renewed within the next few days, it will no longer be recoverable by the University. With GoDaddy’s presence in the state of Arizona and the number of ASU graduates who are employed by GoDaddy, I would be willing to bet someone from ASU will be notified about the expiration of SunDevils.com before the domain name sells via GoDaddy Auctions. Even if the domain name is not renewed, prospective buyers should keep the 2011 UDRP in mind because ASU could just as easily file another UDRP.

Update: The auction has been canceled.