Home 5 With... 5 With… Soeren von Varchmin President of WHD & NamesCon 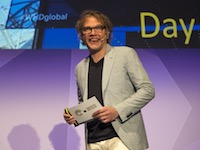 NamesCon is the largest annual domain industry conference that regularly draws over 1,000 attendees to Las Vegas. At the end of the Summer last year, NamesCon was privately acquired by WorldHostingDays (WHD), a conference producer in the cloud and web hosting industry. In another acquisition at the end of last year, the parent company of WHD, Host Europe Group, was acquired by GoDaddy.

In light of all of these corporate changes involving NamesCon, and with the 2018 conference coming up in a few months, I interviewed Soeren von Varchmin to ask some questions about NamesCon 2018. Soeren serves as President of WorldHostingDays and NamesCon. He joined the company in 2014 after spending ten years in sales and business development roles in the cloud service industry. During this time, Soeren has lived and worked in the US, Europe, and Asia.

I asked Soeren five questions as a part of my long running “5 with…” interview series. Some of his responses were lightly edited for grammatical and punctuation reasons.

If you have additional questions for Soeren or the NamesCon team, I invite you to ask in the comment section.

Now that NamesCon is under new ownership, will attendees notice any changes to the conference or format, and if so, what can we expect?

Soeren: The same show organizers are running the day to day operations – we’ve maintained that continuity to ease the transition in ownership. Attendees should only notice improvements based on survey feedback we’ve received! As we’ve done for the past years, we’re taking real attendee feedback and using this to make improvements wherever we possibly can. Applied to our 2018 event, this means fewer sessions and more networking time, improved social events such as an updated format for WaterNight and an amazing closing party on Tuesday night, introducing a new exhibit opportunity for startup companies, and more. Richard (Lau, founder of NamesCon) is a great resource and sparring partner in the background and you will see him on stage in January again!

How will the company’s experience running other shows (WHD, NamesCon China…etc) make for a better NamesCon Global conference in January?

Soeren: Having input from a strong international team, from Vancouver to Cologne to Barcelona, strengthens our diversity and makes NamesCon even more relevant to a global audience. We had two NamesCon events outside of the US this year – namely NamesCon India in Mumbai with 500 attendees and NamesCon China in Shanghai with 250 attendees at our inaugural events. This was a great learning for us and we were able to test new concepts and messages and most important – we connected to the domainers in the upcoming, emerging markets.

While we have a great core event organisation team, which is working together for many years already, the best thing I personally could do to understand the domain industry by heart, I became a domainer myself, playing with the available tools and learning by trial and error. So, I found my investment niche and use the learnings to understand how to run a better NamesCon in the future.

How large of a crowd are you anticipating, and will the make-up of the crowd be any different under the new ownership?

Soeren: Expecting up to 1500 attendees, and we’ve been marketing more to end-users and those in the brand & marketing industries, as well as startups.

Do you anticipate that GoDaddy will have a bigger presence since the company that owns NamesCon is owned by GoDaddy after the Host Europe acquisition? Will GoDaddy’s involvement impact other sponsors?

Soeren: WHD was always owned by a hosting company (originally be intergenia, later by Host Europe Group) and this question never came up in the hosting industry over the last 14 years. To clarify: GoDaddy is just another partner/sponsor of NamesCon – like Verisign, Sedo or Uniregistry. GoDaddy is paying full fees for their sponsorships and they do not have any special treatment, we would not give to someone else in the price range of their sponsorship. GoDaddy is not having any influence on the agenda or insight into event information. WHD and NamesCon run as a standalone profit center under GoDaddy and we see it crucial that the conferences we operate stay neutral. Saying that, the opinion we spread at our events, might sometimes not reflect GoDaddy’s opinion.

With cryptocurrency such a hot topic, will any time be dedicated to discussing cryptocurrency as it relates to domain names? What other emerging topics will be on the agenda this year?

Soeren: I would extend the discussion to the broader subject of Blockchain Technology, where Cryptocurrencies are only a small part of it. I learned a lot about new projects and initiatives coming up around decentralised DNS, domain marketplaces on Blockchain, Timestamp Solutions, Ethereum Name Space (ENS), and while we are very early stage, the solutions are somewhat experimental and sometimes the discussions philosophical at the current stage, we will present some of the stuff we learned about in the last months in January at NamesCon.

Our official agenda will be announced mid-November. You’ll also see sessions on brand resiliency, innovation in the domain industry, how to design the web for millennials, negotiation strategies, and many practical sessions that will give attendees hands-on advice or tools to help them in their business. We strive every year to bring you the best possible content, and every year we have a public call for speaker submissions (2018 window closed in October) to ensure everyone who wants to has the opportunity to participate.

Soeren von Varchmin on Why You Should Attend NamesCon

Elliot Silver - September 28, 2022 5
At the end of my son's soccer game on Saturday, one of the parents came up to the Assistant Coach and asked about the...