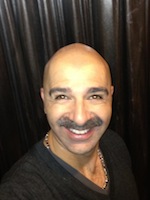 Now that the calendar has turned to December, Movember is officially over for 2011. Ammar Kubba, CEO of Thought Convergence, was a moustache-growing Movember participant, which helped “raise vital funds and awareness for men’s health, specifically prostate cancer and other cancers that affect men.”

In total, Ammar’s commitment helped raise over $3,000 for the campaign: http://www.mobro.co/kubba  (it’s not too late to contribute to this non-profit organization).

As you can see, Ammar grew a pretty solid ‘stache in a month. I am sure he (and his girlfriend) will be happy when it’s shaved. Kudos to Ammar for getting involved in such a positive cause and sticking to it.