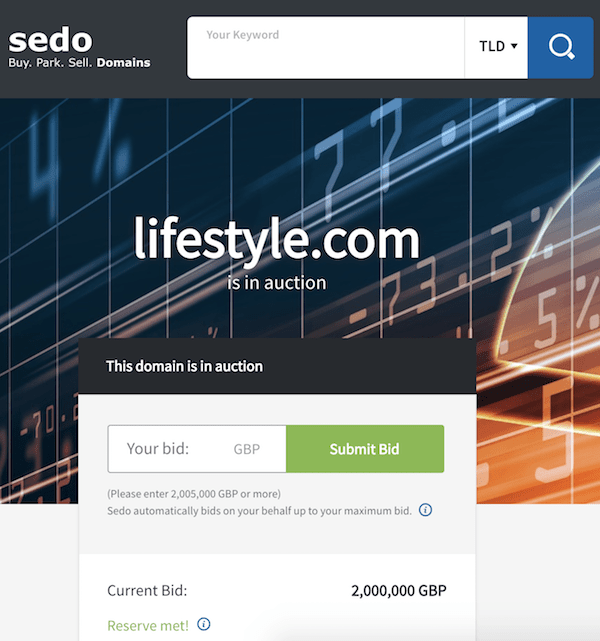 Could we see the largest public domain name sale of the year in less than a week? Lifestyle.com has a 2,000,000 GBP bid in a Sedo auction, and it shows that the reserve has been met. At today’s exchange rate, that bid is $2,436,600 USD. The auction was first noted yesterday by Logan Flatt:

If this bid is legitimate and the domain name sells at this price at the conclusion of the auction, it would rank as the largest domain name sale of the year, easily surpassing the €554,000 sale of OA.com, also on Sedo. In 2019, there were six publicly reported seven figure sales, but there have not been any seven figure deals reported this year.

In order to place a bid in that amount on Sedo, the platform requires “Additional Certification,” which is mentioned clearly on the auction page:

“Please note that in order to place bids above 10,000.00 GBP, an additional certification is required and completion of this process may take several business days.”

It should be noted that this is not the first time Lifestyle.com reportedly had a bid. It does not appear that the domain name sold last year based on Whois records.

Lifestyle.com is a fantastic domain name, and I will keep an eye on forthcoming Sedo sale reports to see if this domain name is sold.

Update: I was told “the auction was canceled after it was discovered there was an issue with the bidder’s account.”