A UDRP was filed against the three letter .com domain name, DVT.com. The UDRP was filed at the World Intellectual Property Organization (WIPO). It is WIPO case #D2018-0738.

DVT.com is a high value LLL.com domain name that was created back in 1995. The domain name appears to be registered privately, so I am unsure of who the registrant is right now. Archive.org shows that the domain name had been used several years ago as a website for an entity called Delta Vortex Technologies.

My first thought when I saw the DVT.com UDRP is that there is a medical ailment called Deep Vein Thrombosis that is usually abbreviated as DVT. In fact, a Google search of “dvt” shows the first results are all related to DVT information: Mayo Clinic, WebMD, MedlinePlus, Wikipedia entry for Deep Vein Thrombosis, and MedicineNet are the top 5 search results for DVT. There are many other similar results at the top. The DVT.com domain name is parked with pay per click advertising links (PPC), all of which appear to be medical-related: 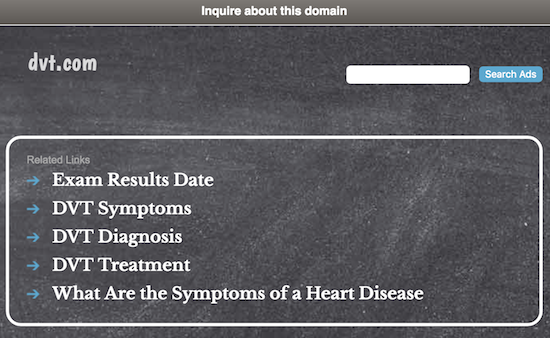 The complainant in the UDRP is a company called Dynamic Visual Technologies (Pty) Ltd. A Google search for that company shows that it is likely the company that operates on the DVT.co.za ccTLD domain name. .co.za is the ccTLD for South Africa. Whether the company tried to buy the domain name using the inquiry form at the top of the landing page is something we will likely learn when the decision is published. I wouldn’t be surprised if the company tried to buy it but decided to use the UDRP process as a “plan B” alternative.

If I was to guess, I would say the domain owner will retain the domain name. Three letter .com domain names like DVT.com hold considerable generic investment value, and the domain name is being used to generate pay per click revenue related to the DVT medical condition. Plenty of other UDRP panels have ruled that generating revenue on generic domain names is a perfectly legitimate business model. I don’t see how the complainant will be able to prove that the domain name was registered and is being used in bad faith (it needs to prove both of these things to succeed). I would also not be surprised to see a Reverse Domain Name Hijacking ruling (RDNH).

Update: UDRP complaint was denied. It does not appear that Reverse Domain Name Hijacking was considered because it was not mentioned in the decision.